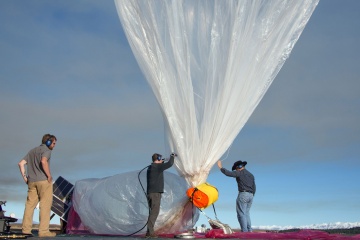 Preliminary testing, dubbed the Icarus tests, began in August 2011. Project lead Rich DeVaul and his team released four latex balloons carrying Linux computing equipment and a WiFi router from the San Luis Reservoir in California. They followed them in a vehicle equipped with antennas, a WiFi card and a spectrum analyzer to test the signal. Other similar tests followed until they were ultimately able to pass a signal from one balloon to another and get an Internet connection in the car. The equipment was reportedly in a styrofoam cooler for some of the early tests.

In 2012, the team name was changed to Daedalus (Icarus's dad). DeVaul became Chief Technical Architect because he preferred to work on the technical stuff, and Mike Cassidy took over as project lead. They hired aerospace engineers, network engineers, mapping specialists, energy specialists, at least one balloonist, military vets and textile experts (including seamstresses) for designing, testing and sewing the balloons. In 2012, they started working with company Raven Aerostar, which manufactures balloons for NASA among others, to help perfect the balloons.

To increase chances of equipment recovery, the test equipment had the words "harmless science experiment" emblazoned on it with a number to call for a reward (but no mention of Google, since it was still a secret project at that point). In October 2012, one of the test balloons apparently sparked some UFO sighting reports in Kentucky and eventually floated to Canada, where it was lost.

The first official pilot tests occurred in June 2013, with thirty balloons released from New Zealand's Christchurch area. They went about 15.5 miles (25 kilometers) up, and each carried around 22 pounds of equipment that communicated wirelessly with special pre-installed bulbous ground-based antennas. There were around 50 testers in all, among them the Nimmo family and the MacKenzie family, who were among the first people to connect to the Internet via a balloon network. The testers were connecting at 3G speeds.

Further tests have been performed in California's Central Valley, Australia, Chile and Brazil, among other places. In June 2014, Linoca Gayoso Castelo Branco, a school in Brazil, was able to connect to the Internet for the first time ever using Project Loon's LTE radio equipped balloons in conjunction with a ground-based antenna on the school roof [sources: Levy, Simonite]. The next step for Google is getting hundreds of balloons up in a ring around the planet to test continuous service in areas in the Southern Hemisphere. The company has some issues with getting overflight permissions in a lot of places, so it's largely testing in the Southern Hemisphere where there aren't as many obstacles of that nature [source: Verge].

In July 2015, it was announced that Google is partnering with the country of Sri Lanka to provide the entire country of 25,000 square miles (64,750 square kilometers) and around 22 million people (most of whom aren't currently online) with Internet access via Project Loon balloons, possibly by early 2016 [sources: Gershgorn, Lavars, Yahoo].

One of the Loon balloons crashed into a palm tree in a residential yard in a Los Angeles, California suburb in September 2015, not too far from its intended landing site [source: Collman]. No one was hurt in the minor incident.