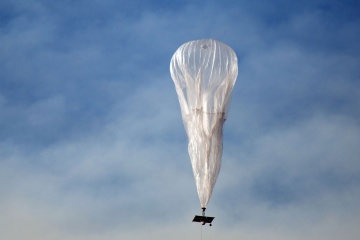 Can balloons like this make the Internet accessible to everyone? That’s Google’s plan.
© Jon Shenk/dpa/Corbis

There are lots of places where Internet service is subpar or nonexistent, or where a lot of people simply can't afford what's available. In 2011, when Project Loon began, the International Telecommunication Union reports that there were 2.2 billion people on the Internet. In 2015, that number has risen to approximately 3.2 billion [sources: Davidson, ITU]. Despite the hefty increase, this still leaves around 4 billion people without Internet access.

Even some people with access don't have quality, uninterrupted high-speed broadband. Connectivity from the sky can provide service in areas that normally have issues, such as mountainous terrain, as well as places that the infrastructure of the Internet has not fully reached. Networks of balloons should be far easier and cheaper to unleash in remote places, including in developing nations, than laying wires and putting up cell towers and other expensive equipment, or using extremely expensive communications satellites. Networks of Google balloons could also be used in emergencies, for instance to get Internet service back up quickly after a natural disaster has damaged ground equipment.

Cellular carriers have shown interest in renting access to Google Loon networks. This could enable them to reach new customers and to provide better service at faster speeds in areas they already cover. It won't be free, but there's hope that some of the cost savings could be passed on to customers in the form of lower prices. Google has already partnered with Vodafone in New Zealand, Telstra in Australia and Vivo and Telebras in Brazil for testing.

Project Loon could be a real boon for society, in an age where being connected to the rest of the world has tremendous benefits. Getting everyone on the planet online would also provide benefits to Google, which relies heavily on revenue from online ads and services. And again, the company would receive payments for access to the Loon networks.

In 2014, Google purchased another solar-powered, high-altitude drone company (reportedly out from under Facebook) called Titan Aerospace to help with several of their projects including Project Loon and mapping, and they bought satellite company Skybox Imaging and invested in spaceflight company SpaceX. SpaceX is seeking permission to launch thousands of small satellites into low orbit to provide high-speed Internet to the world.

Google isn't the only company trying to get Internet to people via the sky. Facebook started their Connectivity Lab with the purpose of getting low-cost Internet to more people all over the world using technologies such as satellites and drones. They bought a solar-powered, high-altitude drone company called Ascenta in 2014, and hired tech experts from places like NASA.

Being able to connect to the Internet gives people access to all the resources the World Wide Web has to offer, from communication to education to business opportunities. Any number of businesses can gain vital information and new sources of materials and products. People in areas with few or no healthcare workers could potentially receive virtual medical care. Teachers and students can instantly get access to supplemental classroom materials, and people without access to schools can read textbooks or take classes online. Young future scientists and inventors can find ideas, resources and possibly even collaborators online.

Access can improve an area's economy. According to Google Loon's project lead Mike Cassidy, increasing a country's Internet penetration by 10 percent results in about a 1.4 percent increase in GDP per year [source: Valve].

Access to the Internet is of vital importance these days, not just for making our lives easier, but for accessing vital services and generally fitting into society. We increasingly communicate online, and do other mundane things like read the news, check the weather, pay bills and consume entertainment. We can also gain education (both outside and inside of school curriculums) to help us improve our prospects, and hunt for jobs well outside the area covered by our local newspapers and labor departments. Not having access to the Internet puts you at a disadvantage, so I'm glad there are people looking into spreading its reach to those who have thus far been left out. And the fact that some of the service may be provided by balloons just makes it sound all the more fun.