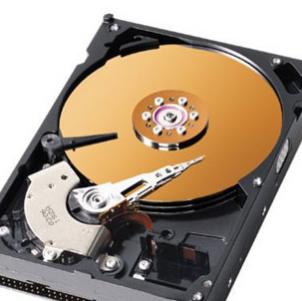 Nearly every desktop computer and server in use today contains one or more hard-disk drives. Every mainframe and supercomputer is normally connected to hundreds of them. You can even find VCR-type devices and camcorders that use hard disks instead of tape. These billions of hard disks do one thing well -- they store changing digital information in a relatively permanent form. They give computers the ability to remember things when the power goes out.

In this article, we'll take apart a hard disk so that you can see what's inside, and also discuss how they organize the gigabytes of information they hold in files!

Hard disks were invented in the 1950s. They started as large disks up to 20 inches in diameter holding just a few megabytes. They were originally called "fixed disks" or "Winchesters" (a code name used for a popular IBM product). They later became known as "hard disks" to distinguish them from "floppy disks." Hard disks have a hard platter that holds the magnetic medium, as opposed to the flexible plastic film found in tapes and floppies.

In the next section, we'll talk about the main differences between casette tapes and hard disks.

Let's look at the big differences between cassette tapes and hard disks:

A typical desktop machine will have a hard disk with a capacity of between 10 and 40 gigabytes. Data is stored onto the disk in the form of files. A file is simply a named collection of bytes. The bytes might be the ASCII codes for the characters of a text file, or they could be the instructions of a software application for the computer to execute, or they could be the records of a data base, or they could be the pixel colors for a GIF image. No matter what it contains, however, a file is simply a string of bytes. When a program running on the computer requests a file, the hard disk retrieves its bytes and sends them to the CPU one at a time.

There are two ways to measure the performance of a hard disk:

The other important parameter is the capacity of the drive, which is the number of bytes it can hold. 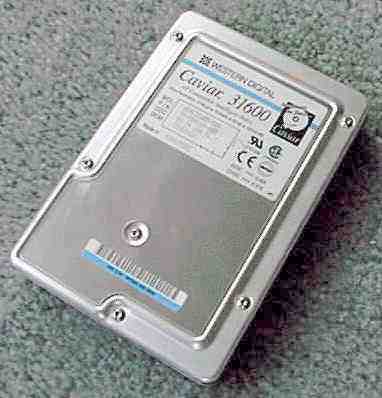 The best way to understand how a hard disk works is to take a look inside. (Note that OPENING A HARD DISK RUINS IT, so this is not something to try at home unless you have a defunct drive.)

Here is a typical hard-disk drive:

Inside: Beneath the Board 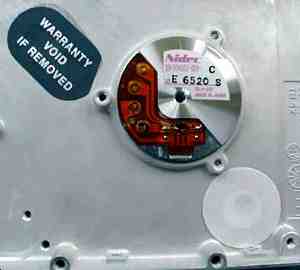 Underneath the board are the connections for the motor that spins the platters, as well as a highly-filtered vent hole that lets internal and external air pressures equalize:

Removing the cover from the drive reveals an extremely simple but very precise interior:

In this picture you can see:

Inside: Platters and Heads

In order to increase the amount of information the drive can store, most hard disks have multiple platters. This drive has three platters and six read/write heads:

The mechanism that moves the arms on a hard disk has to be incredibly fast and precise. It can be constructed using a high-speed linear motor.

Data is stored on the surface of a platter in sectors and tracks. Tracks are concentric circles, and sectors are pie-shaped wedges on a track, like this:

A typical track is shown in yellow; a typical sector is shown in blue. A sector contains a fixed number of bytes -- for example, 256 or 512. Either at the drive or the operating system level, sectors are often grouped together into clusters.

For more information on hard disks and related topics, check out the links on the next page.