What do you think the Internet will be like in 2050? 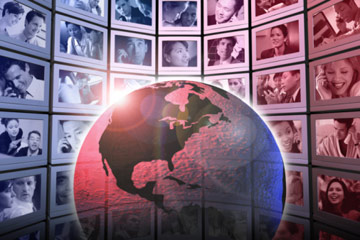 Can you imagine what the Internet will be like in 2050?
Stockbyte/Thinkstock

As technologies go, the Internet is still a baby. You can trace its roots back to the 1950s, when computer technology itself was quite young. In the 1960s and '70s, teams of engineers and computer scientists worked to build the foundation for a network of networks. ARPANET, one of the Internet's predecessors, began modestly as a three-node network. Gradually, smart people began to link networks together using protocols from the ARPANET project. In the 1980s, this network proved to be a valuable tool for research and communication. A decade later, the general public became aware of the Internet as tools like the World Wide Web made it easy for the general user to access it.

But what's in the future for the Internet? The last few years have pointed toward mobile computing. Wireless computer networks and high-speed cellular communication make it easy to connect to the Internet. Some devices remain perpetually connected unless you turn them off or set them to airplane mode. I think these trends point to what the Internet will be in 2050 -- pervasive.

The evolution of the Internet and the evolution of mobile computing will be one and the same. We'll start to see Internet capability in more devices and products. Networking coverage will increase. Wireless networks will act as the primary access point for most devices. The machines acting as the backbone for the Internet will rely upon high-speed physical connections capable of transmitting data at a blistering speed. Sending the equivalent of a Blu-ray disc full of data across a network in the blink of an eye will be the norm.

In this world, we'll experience a reality forged from the physical world around us and the digital world we create to exist on top of it. We'll be able to view this world dozens of different ways. By 2050, it's not unreasonable to guess that we could have eye implants allowing us to see the digital world without the need for a display. Even if we decide that altering ourselves is ethically questionable, we can achieve a similar effect just by building display capabilities into a pair of glasses.

Imagine looking around you and activating a digital overlay that gives you volumes of information about your surroundings. You could use this capability to perform mundane tasks such as finding a place to grab a bite to eat or look up a landlord's contact information. But that's just the beginning! What if you could swap out the view so that you could see what your surroundings looked like centuries ago? Imagine touring a city like Rome and with a simple command viewing it as if you were present when Julius Caesar became emperor. A pervasive Internet coupled with the right mobile technology could make it happen.

It's possible that in this future, privacy becomes obsolete. As we move to a mobile, social and pervasive Internet, we may see our private information become part of the public record. What if you could use that same pair of glasses and Internet connection to look up information about someone standing near you? Imagine meeting someone you'd like to date. You decide to see what this person is like, so you execute a quick command to take a look at what the Internet has to say about him or her. Through facial recognition software and a connection to the Internet, you have instant access to public information about your interest, including any social networks he or she might belong to. It all appears in a cloud around the person and soon you know his or her interests, opinions and even relationship status. But don't feel creepy for doing it -- other people are doing the same thing to you at the same time.

Could this be the real future of the Internet? Science fiction authors have warned us about governments or corporations taking a granular interest in our private information for nefarious purposes. But perhaps in the end Big Brother will turn out to be you and me. What's your opinion? Do you see the Internet becoming part of our perception of the real world around us or do you believe the two will forever remain separate concepts? Share your predictions with us in the comments!