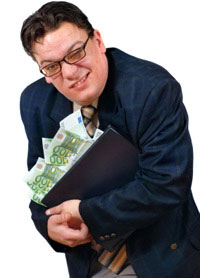 Who owns the Internet? Hint: It's not this guy. See more pictures of popular web sites.
©iStockphoto/FlemishDreams

­Imagine you're in a room full of people from different countries, and everyone only speaks his or her native language. In order to communicate, you'd have to come up with a standard set of rules and vocabulary. That's what makes the Internet so remarkable: It's a system that lets different computer networks communicate with each other using a standardized set of rules. Without rules, these computer networks wouldn't be able to communicate with each other.

Think for a minute about the scope of the Internet. It's a collection of inter-networked computer systems that spans the entire globe. It depends on several sets of rules called protocols. These protocols make it possible for computer communication across networks. It also relies on a huge infrastructure of routers, Network Access Points (NAPs) and computer systems. Then there are the satellites, miles of cable and hundreds of wireless routers that transmit signals between computers and networks.

­It's a truly global system. Cables crisscross countries and oceans, crossing borders and linking some of the world's most remote locations to everyone else. And the Internet is still growing. More computers link to it every day, and various organizations and companies are working to extend Internet access to countries that aren't yet connected.

The Internet is a giant system made up of much smaller systems. If it's one thing, does it have a single owner? Is there some person or entity that controls the Internet? Is it possible for someone to own something that spans nations and oceans? Keep reading to find out.­