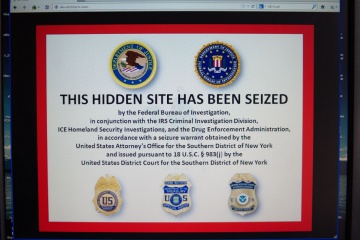 In October 2013, U.S. authorities shut down Silk after the alleged owner of the site Ross William Ulbricht was arrested.
© David Colbran/Demotix/Corbis

The most infamous of these onion sites was the now-defunct Silk Road, an online marketplace where users could buy drugs, guns and all sorts of other illegal items. The FBI eventually captured Ross Ulbricht, who operated Silk Road, but copycat sites like Black Market Reloaded are still readily available.

Oddly enough, Tor is the result of research done by the U.S. Naval Research Laboratory, which created Tor for political dissidents and whistleblowers, allowing them to communicate without fear of reprisal.

Tor was so effective in providing anonymity for these groups that it didn't take long for the criminally-minded to start using it as well.

That leaves U.S. law enforcement in the ironic position of attempting to track criminals who are using government-sponsored software to hide their trails. Tor, it would seem, is a double-edged sword.

Anonymity is part and parcel on the dark Web, but you may wonder how any money-related transactions can happen when sellers and buyers can't identify each other. That's where Bitcoin comes in.

If you haven't heard of Bitcoin, it's basically an encrypted digital currency. You can read all about it on How Bitcoin Works. Like regular cash, Bitcoin is good for transactions of all kinds, and notably, it also allows for anonymity; no one can trace a purchase, illegal or otherwise.

Bitcoin may be the currency of the future -- a decentralized and unregulated type of money free of the reins of any one government. But because Bitcoin isn't backed by any government, its value fluctuates, often wildly. It's anything but a safe place to store your life savings. But when paired properly with Tor, it's perhaps the closest thing to a foolproof way to buy and sell on the Web.