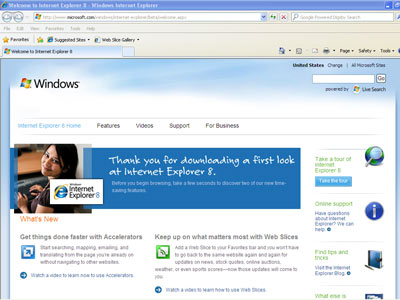 Users who downloaded the beta version of Internet Explorer received a thank you from Microsoft upon launching the new browser.
© HowStuffWorks

The World Wide Web is constantly evolving. The earliest Web pages were static sites that featured a few images, some text and the occasional unwelcome MIDI file. Today, Web sites may incorporate sophisticated elements such as Flash animation, video and customized markup languages. But you can't experience innovative features on the Web without a browser designed to handle everything the Web can offer.

That's why Microsoft released a beta version of Internet Explorer 8 (IE 8) in 2008. Beta versions are unfinished builds of programs. The purpose of a beta version is to allow people to test a product before its final build. This gives developers an opportunity to see which features become popular, which ones are ignored and which ones may need some tweaking before the final release. It also lets the developers test the stability of their program before launch. In January 2009, Microsoft offered consumers a release candidate version of the browser -- one step closer to the final official build of Internet Explorer 8.

Another reason is that Microsoft is preparing Windows 7, the next version of the Windows operating system, for the market. Internet Explorer 7 harnessed the capabilities of the previous operating system: Windows Vista. But Vista suffered from bad press. It turns out the operating system had some problems when it went to market. Many journalists pointed out those problems and before long, people associated Vista with security issues and stability problems. Even though Microsoft released patches to address these early problems, the stigma remained.

Microsoft has designed Internet Explorer 8 to take advantage of some of the capabilities in Windows 7, much as IE 7 worked with Vista. But IE 8 will work on other operating systems as well. Let's take a closer look at the new browser.