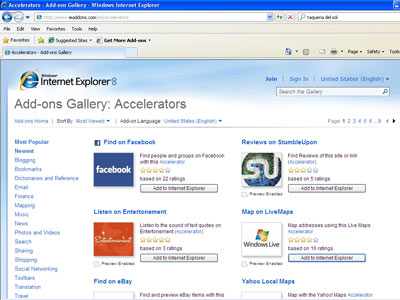 You can choose to add and remove Accelerators applications to Internet Explorer 8 with a couple of mouse clicks.
© HowStuffworks

Dean Hachamovitch is Microsoft's General Manager of Internet Explorer. He says that the Web is becoming more central to our lives and is almost synonymous with computing. Arguably, the Web browser is one of the most important computer applications in the world of software. To make Internet Explorer 8 an improvement over earlier versions, he and his team concentrated on making the browser faster, easier and safer to use.

To compete with browsers like Mozilla Firefox and Google Chrome, the Internet Explorer team configured IE 8 so that it loads Web pages faster than earlier builds of the browser. They paid particular attention to Web pages based on languages like JavaScript or AJAX.

The team wanted to avoid compatibility problems, so one feature they incorporated into IE 8 was the Compatibility View. This gives you the option of viewing Web pages as if you were using ­Internet Explorer 7. A related feature allows you to designate Web sites as either IE 8 or IE 7 sites. After categorizing a site, you'll view it using the optimal version of IE every time you visit it.

One thing the team noticed as it researched the best way to build IE 8 was that most people open several tabs while browsing the Web. That's why the team spent time trying to create a simple way to organize and manage multiple tabs. They developed tab groups. Whenever you open a new tab from a Web page, Internet Explorer 8 places the new tab next to the original Web site. It also color-codes all tab groups. You can also remove a tab from a group, close an individual tab or close an entire tab group with a right-click of the mouse.

Another feature of Internet Explorer 8 is a new address bar that functions in a way similar to Firefox's "Awesome Bar" or Google Chrome's "Omnibar." As you type in a term, Internet Explorer 8 searches your browsing history, bookmarks and RSS subscriptions to find a match. It displays matches in a drop-down menu. Clicking on an entry in this menu takes you to the corresponding page.

Thanks to Dean Hachamovitch, General Manager of Internet Explorer, for his help with this article.