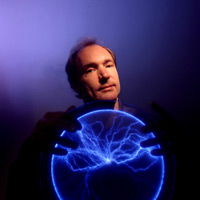 In 1973, engineers began to look at ways to connect ARPANET to the packet radio network (PRNET). A packet radio network connects computers through radio transmitters and receivers. Instead of sending data across phone lines, the computers use radio waves. It took three years, but in 1976 engineers successfully connected the two networks [source: SRI].

Technicians joined the Satellite Network (SATNET) to the other two networks in 1977. They called the connection between multiple networks inter-networking, or the Internet for short. Other early computer networks soon joined. They included USENET, BITNET, CSNET and NSFNET.

In 1990, Tim Berners-Lee developed a system designed to simplify navigation on the Internet. In time, this system became known as the World Wide Web. It didn't take long for some people to mistakenly identify the Internet and the Web as the same thing. The Internet is a global interconnection of computer networks; the World Wide Web is a way to navigate this massive network. In sailing terms, it's like comparing an ocean to a ship.

Most early Internet users were government and military employees, graduate students and computer scientists. Using the World Wide Web, the Internet became much more accessible. Colleges and universities began to connect to the Internet, and businesses soon followed. By 1994, Internet commerce had become a reality.

Today, the Internet is more complex than ever. It connects computers, satellites, mobile devices and other gadgets together in a massive network millions of times more intricate than the original ARPANET. And to think, we owe it all to a silver beeping ball that once orbited miles above the Earth's surface.

A Matter of Protocol

The first four computers in ARPANET all used different operating systems. The system's designers had to come up with a common set of rules the network would follow in order for the computers to communicate with each other without crashing the system. These rules are called protocols. The first set of protocols was collectively called the Network Control Protocol (NCP). In 1983, ARPANET switched to the Transmission Control Protocol and Internet Protocol suite (TCP/IP), the same set of rules the Internet follows today.