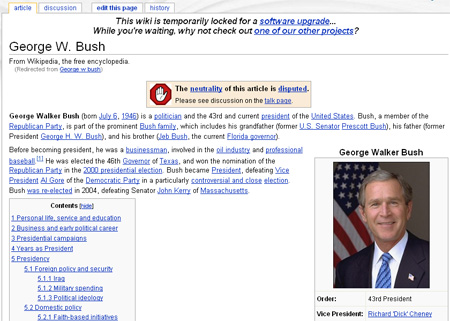 It is easy for a person to vandalize Wikipedia. Since anyone can edit any page, the possibility is always there. The vandal might add profanity or inappropriate images to a page, might erase all the content of a page, etc.

As you can see in the previous section, however, there are tools that make it easy for the community to find and remove vandalism. There are also other tools available on Wikipedia to help corral users who are persistently destructive. For example:

Tools like these make it easy for members of the community to quickly eliminate vandalism and prevent vandals from coming back.

A more subtle, less intentional form of vandalism, called an "edit war," can also occur on a wiki. In an edit war, two or more people edit or revert pages over and over again in order to express their point of view. We'll examine this wiki hallmark in the next section.

Edit wars can happen on any wiki, but on a large wiki like Wikipedia, they can reach epic proportions. The best way to understand an edit war is to look at a battleground page and use it as an example -- Wikipedia's page about George W. Bush, for example.

It is easy to understand why the George W. Bush page might be a battleground. There are many, many people who love George W. Bush, and there are many, many people who despise him. Those who love him naturally want to emphasize things about George Bush that match their view of the man. In the same way, so do those who despise him. Thus, you can get dozens of people editing and re-editing the article to express their point of view.

The interesting thing about an edit war like this is that, with a controversial topic, it is completely natural and to be expected. Both sides have their unique point of view, and those views are incompatible. However, the outcome of the conflict is interesting, and you can see it if you read the George W. Bush page.

Both parties have to reach consensus on the page, and that eventually causes the page to achieve a neutrality and objectivity that satisfies both parties. Controversial topics, like Bush's National Guard service, move to separate pages so they can be dealt with separately. In general (and excluding cases of lame edit wars), the process actually works.

Many Topics, Many Wikis

There are thousands of other wikis on the Internet now. As a genre, wiki sites are growing rapidly. Here are several examples:

Virtually any topic with any sort of active community can, in theory, support a wiki. A wiki gives the community a way to gather information together and modify it as things change.

For this reason, it is now common to see wikis used inside corporations and organizations. Imagine the following scenario: There is a large corporation using an internally developed software application to manage its accounts. Two-thousand people inside the corporation use this application to enter and access data. The program is 25 years old, has never been documented very well and drives people nuts. Training is done by word of mouth.

An environment like this is perfect for a wiki. The 2,000 people using the program can build their own documentation a little bit at a time. Each time someone learns something, they can toss a sentence or two into the wiki to let other people understand how to use the feature. Over time, the 2,000 users will build complete documentation for the entire application.

It is quite likely that wikis and other community-based efforts will grow rapidly as people become familiar and more comfortable with the concept.

For more information on wikis and related topics, check out the links below.

Edit wars demonstrate one type of problem that is unique to wikis. Usually the community can work it out, but sometimes it can't. Wikis, like anything else, have advantages and disadvantages, strengths and weaknesses. The article The Faith-Based Encyclopedia, written by the CEO of Britannica, discusses some of the problems, as does Why Wikipedia Must Jettison Its Anti-Elitism, written by one of Wikipedia's founders.