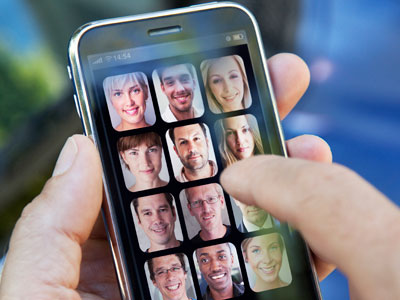 Are the faces you see on your iPhone your friends in real life?
Dimitri Vervitsiotis/Getty Images

In 2006, the Pew Internet & American Life Project published a study titled "The Strength of Internet Ties." Its goal was to find out more about the nature of people's social networks. It found that our social connections break down into two basic types.

Core ties are the people with whom we are the closest. We're in frequent contact with them, we trust them and we turn to them when we need help or have questions. They're among our strongest relationships. Significant ties are the people outside of our core ties who are still connected. We probably have less frequent contact with them and turn to them less for advice or assistance. They're weaker than our core ties but a bit more than casual acquaintances. Significant ties may be important at times, when we need to reach outside of our core tie network for help.

The growth of these weak ties, as they're also called, is exploding. Online social networks allow us to collect weak ties and maintain them better than we would have without Facebook or Twitter reminding us of their existence. And even though we call them "weak," in certain situations your weak ties provide you with the most benefit.

Weak ties allow you to problem-solve more efficiently than you would with the help of your core ties. Let's look at an example. Say you recently lost your job and you're actively searching for leads on a new one. Your weak ties are actually more valuable to you than your core ties in this situation. This is because your core ties, your friends, are very similar to you -- that's why they're your core -- and probably can't give you any information you don't already have yourself. But your weak ties are at the outer edges of your network, and they know people and information that you don't. And because they're connected to you through your social network, they're more willing to help you than, say, an anonymous person on an Internet job board.

In today's dismal job market, social networking sites offer users an edge. The site LinkedIn targets the professional, white-collar employee. As you create a profile, the site suggests possible contacts -- people you may have known in previous jobs or through college and university. You can search for specific people, research companies you'd like to work for and reach out to the right people without having to navigate through a telephone switchboard maze. LinkedIn even lets you write recommendations for people you know, and allows them to return the favor. There's an old adage that states, "It's not what you know; it's who you know," and social networking sites prove that to be true. Social networking and the job market are such a great match that some colleges even offer seminars on how to network online [source: Perez].

We've seen how social networking sites can give you an advantage in the job market. But what about your social relationships?