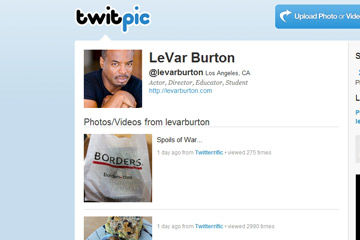 Many celebrities use Twitpic to share random images from their day.
Screenshot by Shanna Freeman

Originally, Twitter was all about the 140 characters, which you could use as you saw fit to describe what you were doing at any given moment. But why not share a photo at the same time? About two years after Twitter's inception, Twitter user (and self-taught Web developer) Noah Everett wanted to be able to quickly and easily share photos directly on his Twitter feed, but he couldn't locate another service that would let him do so. Everett had an unused server that he'd been using for a different photo-sharing Web site that he created, and in a weekend, he figured out how to alter the existing code to make it work with Twitter. It didn't take long for Twitpic to spread and slowly become the most popular photo-sharing service for Twitter. It's been a lucrative business for Everett -- Now Twitpic is an Alexa Top 100 Website and generates more than $1 million in advertising. In 2010, Everett was offered eight figures to sell the company (which he refused) [source: Mixergy].

Although it was designed to work with Twitter, Twitpic is completely separate from the microblogging service, both as a company and a Web site. Images that you upload reside on one of Twitpic's servers, and you could use Twitpic just like any other photo-sharing service if you wanted to (but why would you?). When you make a Twitpic account, you're logging in to Twitter. Photos are Tweeted by way of a short URL, which your followers click on to view the image. They can then make comments on your pictures, which appear on their Twitter feeds as a reply Tweet. It's a simple concept that has really caught on.

Excited by the idea of sharing photos through Twitpic? Find out how you can do so from your phone or computer on the next page.

Twitpic From Your Phone or Computer 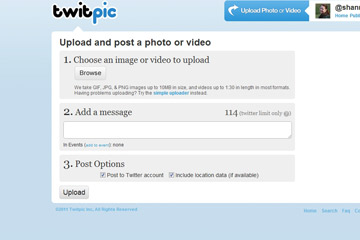 It's easy to upload images to Twitpic.com and share them on your Twitter feed.
Screenshot by Shanna Freeman

Just as there are many different ways to Tweet, there are lots of different ways to use Twitpic. Doing so through the Web site is simple; you just create an account using your Twitter username and feed. Twitpic pulls your userpic and bio from Twitter to create a personal page. Click on "upload a photo or video," and Twitpic presents you with a three-step process. First, you choose a photo or video to upload. Next, you enter a message. Instead of 140 characters, you only have 114, because the rest is taken up by the URL your image generates. If you go beyond 114, followers who click to view the image on Twitpic will see the remainder of your comment there.

Finally, you have a few posting options. The default is to upload your image to your Twitter feed, (send the link, that is), but you can uncheck a box so that the photo will just be loaded to Twitpic. You can also choose not to have location data appended to the image if it's available, Click "upload", and you're done. Your Twitter feed will display your comment, followed by a small link. You can also transfer an image to Twitpic (and to Twitter) via e-mail; the upload page will provide a unique address to use. Just attach the image to your e-mail, and put your comment in the subject line.

Nearly all third-party Twitter applications support image uploading via Twitpic, although some may have another photo-sharing service as the default and you'll need to change it. For example, if you use the desktop version of TweetDeck, go into "settings", click on "services" and choose Twitpic from the drop-down menu. The same thing is true of both the official Twitter apps and third-party versions for smartphones; it just works a little differently depending on which app you're using and which device you have. With most apps, it's a very simple process; you just tap or click on the camera icon in the screen where you compose your Tweets and choose Twitterific. Some apps do have limitations; not all of them allow you to include a comment, so check reviews of the application you're interested in to find out what kind of support it provides for Twitpic.

Twitpic is very basic, but there are ways to optimize the service. Find out how to make it your own on the next page.

Twitpic not only stores your images, it also stashes away other data, such as your location when you took the picture (if you entered it or are using a smartphone to snap your shots, which often adds your location automatically using GPS). When you delete a photograph, it's "no longer viewable" according to Twitpic's terms of service, which doesn't necessarily mean that it no longer exists on the server.

Although Twitpic can be used just to store images, it's more about immediacy than posterity and capturing a moment in time -- much like Twitter itself. Many users employ Twitpic to Tweet images of great meals they've just eaten, a person they just met, something that they just bought or are thinking about buying. Another way to take advantage of Twitpic when you're on the go is to quickly share and save images; later on, when you have the time, you can pick and choose what you want to keep long term.

One interesting way to share your pictures via Twitpic is to link them with an event. On Twitter, events are real-time interactions between users about a topic that last for a specific amount of time. Usually, there's a host or an organizer asking questions and seeking feedback. There's an assigned hashtag so that anybody participating in the event (also known as a Twitter chat or party) can easily follow the participants' Tweets. When uploading a picture from Twitpic's site, you have the option (in the second step) to create an event, including the title, description and trigger (which is a hashtag). Once you build and save the event, it's stored in Twitpic; you can choose it from the drop-down menu to add a picture to it.

So-called "citizen journalists" have availed themselves of Twitpic to quickly share photos of important events in real-time, usually before any members of the media arrive on the scene. One recent example of this happened in 2009, when a U.S. Airways plane crash-landed in the Hudson River in New York City. The first image of passengers being rescued from the plane came from a passenger named Janis Krums, who was on a ferry in the river. Krums took a photo with his iPhone, then used Twitpic to upload it to Twitter. Within half an hour of sending the Tweet, Krums was interviewed on TV as a witness to the event.

OK, so now you've got some tricks for using Twitpic up your sleeve -- and ideas for ways to use it -- but maybe you're curious about the technology behind it? On the next page, we'll take a peek under Twitpic's hood.

In May 2011, Twitpic changed its terms of service. To many users, these changes appeared to state that Twitpic held the copyright to all uploaded images. Twitpic also announced a partnership with a photo-distribution organization, which can sell images posted to the site. Twitter CEO Noah Everett clarified that users retain ownership and copyright of their uploaded images. However, by using Twitpic, you give the company free license to distribute your images as it sees fit. Everett stated that this change was in response to news organizations using images from Twitpic without permission or attribution. Many Twitpic users are still concerned about the potential sale of their images and whether they will get a percentage of those sales. It's important to note that many other photo-sharing services have similar terms of service.