Use of VoIP in Amateur Radio 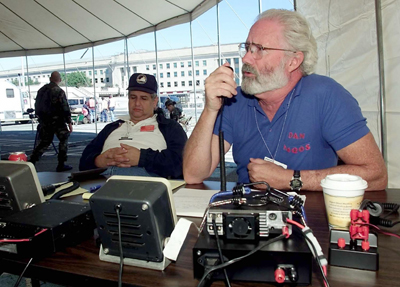 Amateur or ham radio operators can use VoIP technology to set up temporary stations such as this one used by the Red Cross following Sept. 11.
Tim Sloan/AFP/Getty Images

Think of amateur radio, or ham radio, as an early version of the Internet. Using a worldwide network of radio towers, antennas and transceivers, amateur radio enthusiasts are able to communicate with fellow hobbyists around the globe, sometimes by voice and sometimes by Morse code.

Amateur radio is limited by the distance that radio waves can travel. To send a signal to the other side of the world requires calculated timing and more than a little bit of luck. Every 11 years, for example, there's a peak in the number of sunspots produced by the sun, which increases the intensity of something called ionospheric propagation [source: International Solar Terrestrial Physics Program]. By bouncing radio signals high into the ionosphere, ham radio users can send long-distance messages. During off-peak years it's much more difficult.

Now amateur radio fans are using VoIP technology to link users around the globe. Here's how it works. Ham radio has always relied on FM repeaters, large radio towers that act as base stations for accessing the radio network from home. By attaching an Internet-connected PC to these repeater stations, people can communicate with the repeater using VoIP.

Several amateur radio fans have developed special software that helps connect home radio transceivers to the Internet. Users can connect their ham radio transceivers to their PC sound card and use the computer software to search for available repeater stations across the world [source: ARRL]. No longer are ham radio fans limited to the closest repeater station. If you live in Indiana, you can call into a repeater station in Mozambique and chat with local amateur radio aficionados instantly.

There are also software programs that allow you to communicate with other amateur radio users directly from your PC, without having an actual ham radio [source: ARRL]. Some ham radio purists wouldn't call this amateur radio, while others hope that this new technology will draw more young people into the hobby.

For more information about VoIP, amateur radio and related topics, check out the links below.