Browse the article How Kazaa Works 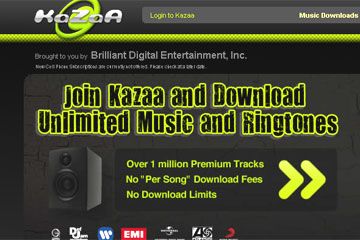 Kazaa enables its users to share not only music, but also movies, television shows and other types of digital information. See more pictures of popular web sites.
HowStuffWorks.com Screenshot

The Internet has enabled us to do things we'd never dreamed possible just a couple of decades ago. In addition to e-mail, online auctions and access to the largest information database ever compiled, we can now swap music and movies with people all around the globe. This capability is called file sharing. One of the most famous file-sharing services, Napster, became hugely popular in the late '90s. Millions of people exchanged music over its servers until copyright-infringement lawsuits shut it down (it has since recreated itself as a pay-per-download service).

Just a few years later, a more wide-sweeping file-sharing network, Kazaa (or KaZaA) emerged. Kazaa enables its users to share not only music, but also movies, television shows and other types of digital information. Kazaa soon became the most popular file-sharing service on the Internet, with millions of users simultaneously sharing content.

But with unlimited file sharing comes the big question: Should users be granted unrestricted -- and free -- access to copyrighted movies, music and games? The recording and film industries continue to respond with a resounding "No." After being sued for copyright infringement by the Recording Industry Association of America (RIAA), the original Napster was forced to shut down; Kazaa now finds itself in similar hot water. So far, it has weathered the legal storm.

In this article, we'll find out exactly how Kazaa works, learn how its users share data across the Internet and examine why Kazaa has thus far survived the legal battle.

Kazaa was developed in March 2001 by programmers Niklas Zennström and Janus Friis of the Dutch company Consumer Empowerment. It was designed as a sort of open forum where users could share all types of files -- movies, books, games, etc. Users could disseminate both content they had created themselves and content they had purchased or downloaded elsewhere. The latter would eventually get Kazaa into trouble, just as it had Napster. In 2001, after American music labels and movie studios launched a copyright infringement suit against Kazaa, Zennström and Friis shut down their operations and transferred ownership to Sharman Networks Limited, a company based in the South Pacific.

But today, despite its legal setbacks, Kazaa remains a thriving business with millions of users worldwide. When users download Kazaa software, they can:

Kazaa is one of the most popular P2P networks on the Internet. On any given day, it has around 3 million users sharing upwards of 800 million files.

To search for a file on Kazaa, users type the name of the file they want into a box and hit search.

Then they select the file they want to download from a list of results. They can select from two file types:

But unlike Napster, which distributed content via a centralized server, Kazaa uses a decentralized system. Kazaa users contact one another directly online to share content. Kazaa's decentralization is one of the main reasons why it has weathered the legal firestorm this long.

To transfer data between users (peer-to-peer), Kazaa uses the FastTrack protocol. FastTrack is a so-called "second generation" P2P protocol. The system divides Kazaa users into two groups: supernodes and ordinary nodes. Supernodes are powerful computers with fast network connections, high bandwidth and quick processing capabilities (computer owners don't know that their computers have been designated as supernodes). The approximately 30,000 supernodes on Kazaa act a lot like traffic hubs, processing data requests from the slower ordinary nodes. Each supernode may serve between 60 and 150 ordinary nodes at one time.

When a user installs the Kazaa software on his or her computer, it comes coded with a list of supernodes. Every time the user launches the Kazaa application, his or her computer registers with the central server and then chooses from a list of currently active supernodes. When the computer sends out a request for files the user wants to download or upload, the request is funneled through the supernode. The supernode communicates with other supernodes, which in turn connect to regular nodes that in turn connect to even more regular nodes, to fulfill the request until the Time to Live of 7 runs out -- this means that the search request will extend seven levels into the network before it stops propagating. Once the correct file has been located, it is transferred directly from the file owner to the requester using HTTP (HyperText Transfer Protocol) -- it doesn't have to go through a supernode.

Trying to capitalize on the success of Kazaa, a number of programmers and companies have come up with their own, unofficial versions of the file-sharing software. Many of these programs claim to add functionality while eliminating adware and spyware. Some popular rip-offs include Kazaa Lite Resurrection, Kazaagold, Kazaa Lite Tools K++ and Diet K. Kazaa views these copies as copyright infringers, and in 2003, the company filed a complaint with the Digital Millennium Copyright Act (DMCA) asking that all of the "infringing" sites be removed from the Internet.

Like the old version of Napster, Kazaa users can exchange copyrighted material without paying royalties to the owners. While Kazaa claims to be "completely legal," there are those who disagree: The free-to-download blue files are controlled by Kazaa users and include copyrighted content. Movie studios and record labels have filed several infringement lawsuits not only against Kazaa, but also against individual Kazaa users.

In 2001, Kazaa was sued by a Dutch music company and was ordered to stop its users from violating copyrights or face steep penalties. In response to the decision, Kazaa transferred ownership to offshore companies, primarily Sharman Networks Limited on the island of Vanuatu. But in 2002, a Dutch appeals court overturned the previous judgment, ruling that Kazaa was not responsible for the actions of its users (see afterdawn.com - Dutch appeals court: KaZaA is legal). Its decentralized structure means that Kazaa is not involved in the actual file sharing -- all searches and downloads take place between actual user computers. Later that year, Kazaa was sued again, this time in the United States by the Recording Industry Association of America (RIAA) and the Motion Picture Association (MPAA). As of February 2005, the decision in that suit is still pending.

Kazaa's argument that its decentralized setup frees it from liability was given a boost in 2003, when a U.S. District Court judge ruled that Grokster and Morpheus, two other file-sharing services, were not liable for their users' actions.

That leaves only the users themselves as liable for sharing copyrighted material. In 2003, the Recording Industry Association of American (RIAA) began targeting individual users with lawsuits. The RIAA didn't go after just anyone -- they zeroed in on people who had made thousands of copyrighted files available to other users. These repeat file sharers were identified by their IP address and hit with lawsuits ranging from $750 to $150,000. In October 2004, the International Federation of the Phonographic Industry (IFPI) similarly launched lawsuits against several hundred users of Kazaa and two other file-sharing services.

In 2003, the music industry lost an estimated $300 million in CD sales to P2P file-sharing services like Kazaa. They fought back by firing lawsuits against Kazaa and other, similar services for copyright infringement. But while those suits were being fought in court, the music industry launched another, more unconventional attack against Kazaa: They sabotaged their own material. Record companies "polluted" Kazaa by creating fake versions of songs and then distributing those fakes on Kazaa. The songs play correctly for the first 10 seconds, but the remainder of the track consists of nothing more than a repeated "blipping" noise. When unsuspecting users download the fake songs and distribute them to other users, the number of fake copies circulating multiplies, often exceeding the number of real copies. The idea is to frustrate Kazaa users to the point where they abandon the system and purchase the song instead.

Kazaa has often been accused of installing spyware and adware on its users' machines to monitor their movements throughout the Web and to download ads to their computer without their knowledge. The old version of the software came bundled with spyware and adware code, and although they were optional, removing these additions during the download process was complicated. Today the company asserts that it does not collect or use personal information about its users. Copycat versions of Kazaa, such as Kazaagold and Kazaa Lite Tools K++, claim that their software is free from adware and spyware.

To prevent downloading of sensitive information, Kazaa advises its users to set up a special "My Shared Files" folder on their desktop. Then, when people try to download a file, they can only have access to the shared folder, rather than being allowed to wander freely across the individual's hard drive. Kazaa also comes equipped with virus-protection software that weeds out some of the bugs floating around cyberspace.

For more information on Kazaa, file sharing and related topics, check out the links on the next page.

Kazaa in the News