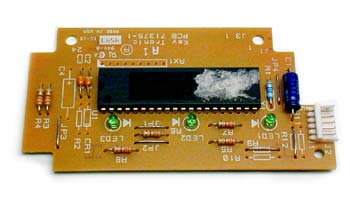 The microprocessor and controller circuitry of a keyboard

A keyboard is a lot like a miniature computer. It has its own processor and circuitry that carries information to and from that processor. A large part of this circuitry makes up the key matrix.

The key matrix is a grid of circuits underneath the keys. In all keyboards (except for capacitive models, which we'll discuss in the next section), each circuit is broken at a point below each key. When you press a key, it presses a switch, completing the circuit and allowing a tiny amount of current to flow through. The mechanical action of the switch causes some vibration, called bounce, which the processor filters out. If you press and hold a key, the processor recognizes it as the equivalent of pressing a key repeatedly.

A computer can also use separate character maps, overriding the one found in the keyboard. This can be useful if a person is typing in a language that uses letters that don't have English equivalents on a keyboard with English letters. People can also set their computers to interpret their keystrokes as though they were typing on a Dvorak keyboard even though their actual keys are arranged in a QWERTY layout. In addition, operating systems and applications have keyboard accessibility settings that let people change their keyboard's behavior to adapt to disabilities.