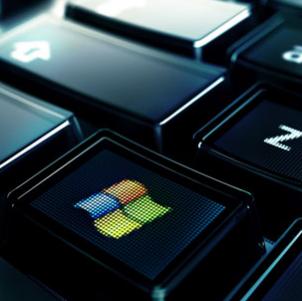 Keyboards differ by manufacturer and the operating system they are designed for.
Photo courtesy www.artlebedev.com

A keyboard's primary function is to act as an input device. Using a keyboard, a person can type a document, use keystroke shortcuts, access menus, play games and perform a variety of other tasks. Keyboards can have different keys depending on the manufacturer, the operating system they're designed for, and whether they are attached to a desktop computer or part of a laptop. But for the most part, these keys, also called keycaps, are the same size and shape from keyboard to keyboard. They're also placed at a similar distance from one another in a similar pattern, no matter what language or alphabet the keys represent.

Most keyboards have between 80 and 110 keys, including:

The typing keys include the letters of the alphabet, generally laid out in the same pattern used for typewriters. According to legend, this layout, known as QWERTY for its first six letters, helped keep mechanical typewriters' metal arms from colliding and jamming as people typed. Some people question this story -- whether it's true or not, the QWERTY pattern had long been a standard by the time computer keyboards came around.

Keyboards can also use a variety of other typing key arrangements. The most widely known is Dvorak, named for its creator, August Dvorak. The Dvorak layout places all of the vowels on the left side of the keyboard and the most common consonants on the right. The most commonly used letters are all found along the home row. The home row is the main row where you place your fingers when you begin typing. People who prefer the Dvorak layout say it increases their typing speed and reduces fatigue. Other layouts include ABCDE, XPeRT, QWERTZ and AZERTY. Each is named for the first keys in the pattern. The QWERTZ and AZERTY arrangements are commonly used in Europe.

The numeric keypad is a more recent addition to the computer keyboard. As the use of computers in business environments increased, so did the need for speedy data entry. Since a large part of the data was numbers, a set of 17 keys, arranged in the same configuration found on adding machines and calculators, was added to the keyboard.

The Apple keyboard's control keys include the "Command" key.

In 1986, IBM further extended the basic keyboard with the addition of function and control keys. Applications and operating systems can assign specific commands to the function keys. Control keys provide cursor and screen control. Four arrow keys arranged in an inverted T formation between the typing keys and numeric keypad move the cursor on the screen in small increments.

Other common control keys include:

The Windows keyboard adds some extra control keys: two Windows or Start keys, and an Application key. Apple keyboards, on the other hand, have Command (also known as "Apple") keys. A keyboard developed for Linux users features Linux-specific hot keys, including one marked with "Tux" the penguin -- the Linux logo/mascot.