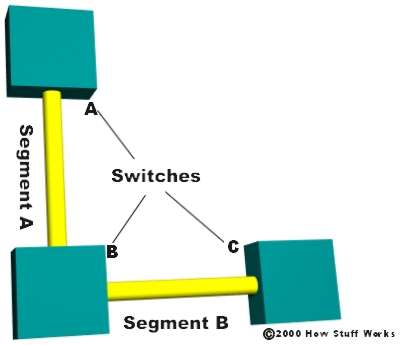 When we talked about bus and ring networks earlier, one issue was the possibility of a single point of failure. In a star or star-bus network, the point with the most potential for bringing all or part of the network down is the switch or hub. Look at the example below:

In this example, if either switch A or C fails, then the nodes connected to that particular switch are affected, but nodes at the other two switches can still communicate. However, if switch B fails, then the entire network is brought down. What if we add another segment to our network connecting switches A and C?

In this case, even if one of the switches fails, the network will continue. This provides redundancy, effectively eliminating the single point of failure.

But now we have a new problem.