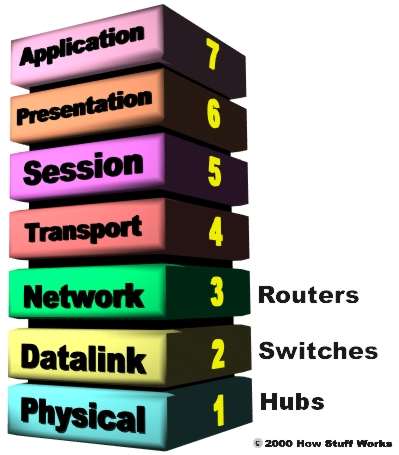 The OSI Reference Model consists of seven layers that build from the wire (Physical) to the software (Application).
HowStuffWorks.com

You can see that a switch has the potential to radically change the way nodes communicate with each other. But you may be wondering what makes it different from a router. Switches usually work at Layer 2 (Data or Datalink) of the OSI Reference Model, using MAC addresses, while routers work at Layer 3 (Network) with Layer 3 addresses (IP, IPX or Appletalk, depending on which Layer 3 protocols are being used). The algorithm that switches use to decide how to forward packets is different from the algorithms used by routers to forward packets.

One of these differences in the algorithms between switches and routers is how broadcasts are handled. On any network, the concept of a broadcast packet is vital to the operability of a network. Whenever a device needs to send out information but doesn't know who it should send it to, it sends out a broadcast. For example, every time a new computer or other device comes on to the network, it sends out a broadcast packet to announce its presence. The other nodes (such as a domain server) can add the computer to their browser list (kind of like an address directory) and communicate directly with that computer from that point on. Broadcasts are used any time a device needs to make an announcement to the rest of the network or is unsure of who the recipient of the information should be.

A hub or a switch will pass along any broadcast packets they receive to all the other segments in the broadcast domain, but a router will not. Think about our four-way intersection again: All of the traffic passed through the intersection no matter where it was going. Now imagine that this intersection is at an international border. To pass through the intersection, you must provide the border guard with the specific address that you are going to. If you don't have a specific destination, then the guard will not let you pass. A router works like this. Without the specific address of another device, it will not let the data packet through. This is a good thing for keeping networks separate from each other, but not so good when you want to talk between different parts of the same network. This is where switches come in.