How the MacBook Works 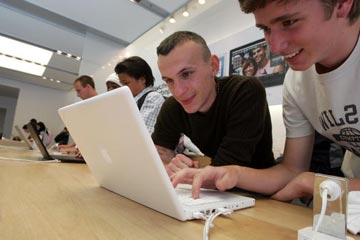 Customers at the Apple store in San Francisco try out the original MacBook back in 2006.
Justin Sullivan/Getty Images

In the spring of 2006, Apple unveiled the MacBook, a 13-inch (33-centimeter) laptop that would soon become a phenomenon. It replaced Apple's everyday laptop, the iBook, and the professional model, the PowerBook -- two laptops that had been popular, but not nearly as successful as the MacBook went on to be [source: Gallagher]. In a short time, the shiny, white, plastic MacBooks could be seen dotting the tables of cafés all across the world, staking their claim to counter space alongside lattes and gourmet muffins.

Perhaps it was the simplicity of the machine that made it so popular. With a sleek, elegant design, not overloaded with frills or unnecessary extras, it became the quintessential computer for college freshmen, young professionals and families alike. The standard white body, emblazoned with a glowing Apple logo, was unmistakably familiar, though a few willing to spend an extra $200 sported the even sleeker black-bodied model. Sure, PC owners had their multi-colored computers in different shapes and sizes, and with lots of buttons and customizable options, but MacBook owners didn't care because their machine was powerful, simple and beautiful. Plus, it was a Mac, which meant it faced few of the problems that plagued PCs, like crashing or viruses [source: Stein]

With all of the power and reliability of a Mac, the portability and professional look of similar PC laptops and a simplicity and ease of use that made Mac lovers of many former PC owners, the MacBook fit many people's idea of the perfect computer.

But then, suddenly, it was gone.

The last model update for the traditional MacBook came in mid-2010, and by July of 2011 the model had been discontinued in favor of the wafer-thin MacBook Air and the ultra-powerful MacBook Pro models. Apple didn't make a big deal out of the transition -- they simply stopped selling it. But even though you can't buy a new MacBook these days, refurbished models are still available and many people continue to own the trendy computer that took the laptop market by storm in the first decade of the millennium.

So what made the best-selling Mac in history so great? Keep reading to find out.

Many of the basic specs of the MacBook remained unchanged over the four years it was produced. The first MacBook was 13 inches (33 centimeters) wide, had a 1280 x 800 resolution screen, sported a plastic (polycarbonate) body and was available in two colors: black and white. The final 2010 version also had those same specs. The only major body change came in 2008, when the aluminum unibody model was released. However, in 2009 the aluminum unibody version was rebranded as the 13-inch MacBook Pro [source: Apple].

The internal hardware, on the other hand, was upgraded over time. In May of 2006 there were three versions of the MacBook available. The first had a 1.83 GHz Core Duo processor and a 60 GB hard drive. The second two were slightly more powerful, with a 2.0 GHz processor and an 80 GB hard drive. All three versions had 512 MB of memory. In mid-July, however, Intel unveiled its new Core 2 Duo processor, and the November 2006 MacBook offerings reflected that change. All three released that month sported the new Core 2 Duo processor (in 1.83 and 2.0 GHz). Another big change by the end of 2006 was that the top tier MacBook now had a 120 GB hard drive and 1 GB of memory -- twice as much storage space as its first tier model [source: EveryMac].

Over the next four years all specs on the MacBook continued to improve. By the time the computer was phased out in 2010, the offerings had increased tremendously -- a 2.4 GHz processor, a 250 GB hard drive and 2 GB of memory -- not far from what the 13-inch MacBook Pro was offering at the time.

The MacBook also featured a touchpad (or trackpad) mouse that sat right in front of the keyboard and a built-in camera right above the monitor. The 2006 model could get 6 hours of battery life from its lithium-polymer battery, and by 2010 the battery could last for 10 hours. The MacBook also had several ports to allow you to hook up with other devices. All versions of the MacBook featured an Ethernet port, two USB ports, a mini DisplayPort (to connect to a TV or computer monitor), a FireWire port (to hook into a computer network) and a DVD drive. Some early versions had separate in and out audio ports, but the later versions combined these into one [sources: Apple, Apple].

The price of the MacBook wavered surprisingly little during its four-year stint. When the first MacBook was introduced in early 2006, the starting retail price was $1,099 [source: Apple]. The final version of the MacBook in 2010 retailed for $999 [source: Bradford] -- just $100 less than its predecessor.

Apple is known for putting great quality software on all its computers. One of the highlights has always been the Mac operating system. Distinctly different from the Windows operating system found on most PCs, the Mac OS has been applauded for its simplicity, high quality and ease of use. In 2006 the standard operating system on the MacBook was Mac OS X Tiger -- which included a bunch of useful tools like Dashboard, Mail, iChat, Safari, QuickTime, Address Book and DVD Player. The 2006 MacBook also came with iLife (which included iPhoto, iTunes, iMovie, iDVD, iWeb and Garage Band) and Front Row, a media application [source: Apple].

It's clear that Apple found a winning combination with the MacBook's standard software, because by 2010 not much had changed. The operating system had gone through two iterations -- Leopard in 2007 and then Snow Leopard in 2009. Snow Leopard featured upgraded versions of the programs available with Tiger and Leopard, and a few additional features including Time Machine (a backup tool) [source: Apple]. It also offered iLife, which was made up of all the same programs as the 2006 version, except for iTunes (which is now available as a free download online).

While MacBooks already come with a great suite of software to make work and life easier, Apple offers a ton of extra software you can use to upgrade your system. One of the most popular software compilations is iWork, Apple's equivalent of Microsoft Office that includes page layout and design software, a spreadsheet program and presentation software. You can still get Microsoft Office for Mac, however, and Apple's version has file types that are compatible with the Microsoft version.

Another popular program for the MacBook is Logic Studio, which lets you record, mix and edit music. If you're a professional or amateur photographer, the Aperture software lets you edit and organize your photos. Final Cut Pro, another popular software, lets you edit video and other media using professional editing tools. With so many design and media tools, it's not surprising that Apple's software is used and loved by at-home experimenters and industry professionals alike.

The standard accessory you'll get with a MacBook is a power cord -- which is good because even though MacBooks have a long battery life, a laptop is useless without a power source. Everything else, however, must be purchased separately.

Apple offers a wide variety of MacBook accessories for sale; many improve the functionality of your MacBook, making it easier to use. A mouse and keyboard -- either with a USB cord or wireless -- are great if you spend a lot of time on the computer or use the MacBook for work. The mouse is especially helpful because the MacBook's fingertip trackpad can be difficult to use for extended periods of time. You can also buy a variety of adapters, such as cords to hook the computer to a television or even to covert the power supply so you can use your computer in other countries. Other functional add-ons include a stand, a smart card reader and a projector [source: Apple Store].

Some accessories you can purchase make the MacBook more fun to use. For example, if you like listening to music you might want to buy headphones or speakers. On the other hand, if you like creating music, Apple offers several types of DJ controllers so you can mix your own music, a guitar input so you can hook up your guitar to the computer, a microphone and even a music keyboard. If you use your computer for watching movies, purchasing a remote control would allow you to control the video playback from a comfy place on the couch. You can also get a webcam for chatting or business.

Sure the MacBook is fun and functional, but it’s not exactly cheap. If you buy one, you’ll probably want to protect your investment by making sure the MacBook is safe from theft or damage. For that purpose, Apple offers locks so you can stop your computer from walking away, and screen and keyboard protectors to defend against scratches and spills. If you’re worried about losing the information stored on your computer, you can buy Time Capsule, which is an external data backup device that ensures you won’t lose any files if something goes wrong.

To learn more about Macs, browse the links on the next page.

You may have heard it said that there are two types of people: Mac people and PC people. But what is it about Macs that makes their users love them so much? One great thing is their simplicity. Sure, you can't rebuild the hardware or tweak the specs like you can a PC, but for the average computer user that's not a problem. Plus, it comes with great, quality software and isn't loaded down with unnecessary extras. Macs also have an especially stable operating system, which means they run faster and crash less often than most PCs [source: Stein].