What is Thunderbolt technology in a Mac? 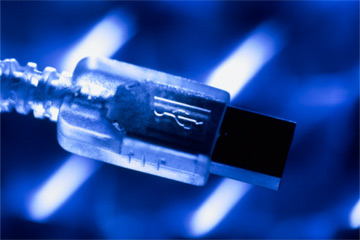 If cables could sweat, the Thunderbolt one might, given the speed and the volume of the data it can handle.
Comstock/Thinkstock

Cables are an annoyance -- unglamorous but necessary for our digital lifestyle to function. Despite secondary status in our computerized world, however, cable technology -- or input/output (I/O) technology -- has had to sprint to support the increasingly sophisticated barrage of computers, televisions, smartphones and other devices. So, what's the next step forward in I/O? According to Apple and Intel, it's Thunderbolt, a collaboration between the two titans.

On the surface, Thunderbolt resembles familiar technologies like USB, but its speed, simplicity and versatility ultimately set it apart from older I/O innovations. Originally developed under the code name Light Peak, Thunderbolt carries both data and display signals over a single cable while simultaneously providing 10 watts of power to peripherals [source: Apple].

What's more, Thunderbolt gets along with its peers. It's dual-protocol, meaning that it works with PCI Express and DisplayPort -- established technologies designed for connecting computer components and external displays, respectively.

It's fast, too. Thunderbolt's data transfer rate of about 10 Gbps is twice the speed of USB 3.0, allowing users to snag a high-definition movie off of an external hard drive in about 30 seconds [source: Intel]. Users can also connect Thunderbolt peripherals in a daisy chain configuration, so an external hard drive connected to a video capture device that's linked to a display could all occupy just one port on your computer.

Next, we'll talk about how Thunderbolt moves media so quickly and blaze through a downside or two.

Thunderbolt: Media Mover for the Masses?

Thunderbolt owes its speed and versatility to a couple of things. First, the cables are made of multiple copper wires capable of sending information both to and from devices simultaneously. As Intel and Apple continue to develop this thruway for data, those cables might switch over to being fiber-optic instead of copper, enabling even higher data transfer speeds and longer cable lengths. Second, Intel has developed a specialized chip that integrates with all Thunderbolt technology and controls how information is passed to and from devices while identifying and splitting out multiple types of signals. This allows a wide array of devices to all use the same port despite requiring completely different types of signals.

Apple was so convinced that the I/O system represents the future of connectivity that it included a Thunderbolt port across its entire line of Macs, from the high-end MacBook Pro to the entry-level Mac mini. That move gives everyone, from novice users to seasoned Apple professionals, access to Thunderbolt, though the technology proves particularly useful for demanding tasks like video editing.

Still, like all new technologies, widespread adoption will take time. As of August 2011, only a few compatible devices were already on the marketplace, including hard drive arrays from Pegasus and Apple's own 27-inch (69-centimeter) Thunderbolt display. However, because Thunderbolt connectors are the same size as a mini DisplayPort connectors, monitors using DisplayPort are backward-compatible with Thunderbolt-enabled computers. Apple also makes a variety of adaptors that allow users to hook devices that use FireWire, HDMI and other technologies to their Thunderbolt port.

For all of its potential, Thunderbolt does have a few downsides. Its peripherals and cables were fairly expensive out of the gate. For instance, the cables debuted at $49, and Apple's Thunderbolt display approached a thousand dollars, or about two to three times more expensive than a monitor with similar specs from another maker. Those prices might change with the ripple of adoption though. And because it's built around PCI Express, Thunderbolt won't likely make its way to iOS devices (ones that run on Apple's mobile operating system) like the iPhone or the iPad since they're based on a different technology.

If Thunderbolt does take off, however, you can expect to see peripherals designed from the ground up to take advantage of its strengths, while devices that depend on older I/Os might begin to look a bit dated. So while the technology has a long way to go before it's ubiquitous, with support from the same company that made USB a technological mainstay, Thunderbolt has a very bright future.