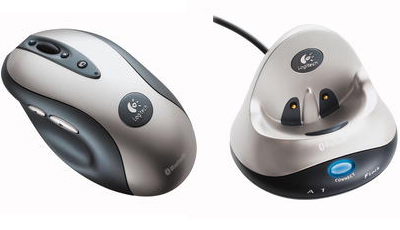 Most wireless mice use radio frequency (RF) technology to communicate information to your computer. Being radio-based, RF devices require two main components: a transmitter and a receiver. Here's how it works:

Many electronic devices use radio frequencies to communicate. Examples include cellular phones, wireless networks, and garage door openers. To communicate without conflicts, different types of devices have been assigned different frequencies. Newer cell phones use a frequency of 900 megahertz, garage door openers operate at a frequency of 40 megahertz, and 802.11b/g wireless networks operate at 2.4 gigahertz. Megahertz (MHz) means "one million cycles per second," so "900 megahertz" means that there are 900 million electromagnetic waves per second. Gigahertz (GHz) means "one billion cycles per second." To learn more about RF and frequencies, see How the Radio Spectrum Works.

Unlike infrared technology, which is commonly used for short-range wireless communications such as television remote controls, RF devices do not need a clear line of sight between the transmitter (mouse) and receiver. Just like other types of devices that use radio waves to communicate, a wireless mouse signal can pass through barriers such as a desk or your monitor.

RF technology provides a number of additional benefits for wireless mice. These include:

As with most mice on the market today, wireless mice use optical sensor technology rather than the earlier track-ball system. Optical technology improves accuracy and lets you use the wireless mouse on almost any surface -- an important feature when you're not tied to your computer by a cord.

In order for the transmitter in the mouse to communicate with its receiver, they must be paired. This means that both devices are operating at the same frequency on the same channel using a common identification code. A channel is simply a specific frequency and code. The purpose of pairing is to filter out interference from other sources and RF devices.

Pairing methods vary, depending on the mouse manufacturer. Some devices come pre-paired. Others use methods such as a pairing sequence that occurs automatically, when you push specific buttons, or when you turn a dial on the receiver and/or mouse.

To protect the information your mouse transmits to the receiver, most wireless mice include an encryption scheme to encode data into an unreadable format. Some devices also use a frequency hopping method, which causes the mouse and receiver to automatically change frequencies using a predetermined pattern. This provides additional protection from interference and eavesdropping.