How Will the Pi Help Kids to Program? 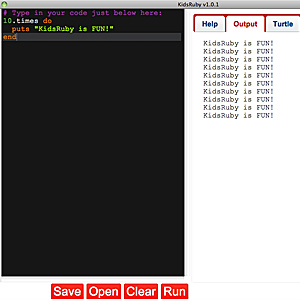 A split screen of the sort that kids encounter when they're programming on KidsRuby
Screenshot by HowStuffWorks.com

Students can take computer programming classes in school, but these courses aren't required for everyone in most places, and they often start in high school, whereas Upton and others would like kids to start earlier. The bulk of the focus of computer education is on operation rather than programming, as with the British Information and Communication Technology (ICT) program that's being touted as one of the things causing a shortage of advanced skills in the U.K.

But just as in the '80s, an interest in games and other multimedia material can be a gateway into programming for a lot of children and young adults. Software-based learning tools are available that take advantage of this fact, and they're being used to teach programming fundamentals. One is the Scratch language created at MIT.

Scratch is a graphically based drag-and-drop language that kids can use to create interactive multimedia projects without having to learn difficult language syntax. Although designed for elementary and middle school students, it's even being employed in college courses on introductory computing.

Another drag-and-drop tool is Alice, developed at Carnegie Mellon University to teach object-oriented programming, again by having students build animations and games. And there's also an Xbox 360-based visual language called Kodu that allows you to build games with your game controller as an input device. Children or adults can use these environments to learn programming concepts without having to type and debug code.

One tool that teaches real code is Kids Ruby, which, as the name implies, teaches kids the Ruby programming language. Once you've read a few short pages into the first lesson, it has you write a few simple lines of code on one side of the program window, hit a run button and see the results on the other side. You slowly learn to code as the lessons become more complex. The Kids Ruby team has even gotten it working on the Raspberry Pi, so it might be a great start for any kids curious about programming on the new device.

The Raspberry Pi team is banking on the development of such education-based software to help make the device more accessible to kids. One way this device is likely to interest more children in programming is simply by making a programming platform available to them. They might once again have the opportunity to own their own computers on which to code and tinker. A price tag of $25 to $35 is a more palatable replacement cost than any repair work to the expensive family computer. At that price, it may also be accessible to disadvantaged children whose families currently don't own computers. Schools have already shown interest, so even kids who can't buy one might get exposure and practice in the classroom.

Want to grab a Raspberry Pi of your own?