Browse the article How Scanners Work 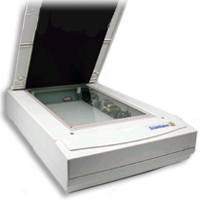 The basic principle of a scanner is to analyze an image and process it.
HowStuffWorks.com

Scanners have become an important part of the home office over the last few years. Scanner technology is everywhere and used in many ways:

The basic principle of a scanner is to analyze an image and process it in some way. Image and text capture (optical character recognition or OCR) allow you to save information to a file on your computer. You can then alter or enhance the image, print it out or use it on your Web page.

In this article, we'll be focusing on flatbed scanners, but the basic principles apply to most other scanner technologies. You will learn about the different types of scanners, how the scanning mechanism works and what TWAIN means. You will also learn about resolution, interpolation and bit depth.

On the next page, you will learn about the various parts of a flatbed scanner.

Anatomy of a Scanner

Close-up of the CCD array

Parts of a typical flatbed scanner include:

The core component of the scanner is the CCD array. CCD is the most common technology for image capture in scanners. CCD is a collection of tiny light-sensitive diodes, which convert photons (light) into electrons (electrical charge). These diodes are called photosites. In a nutshell, each photosite is sensitive to light -- the brighter the light that hits a single photosite, the greater the electrical charge that will accumulate at that site.

The image of the document that you scan reaches the CCD array through a series of mirrors, filters and lenses. The exact configuration of these components will depend on the model of scanner, but the basics are pretty much the same.

On the next page, you will see just how all the pieces of the scanner work together. 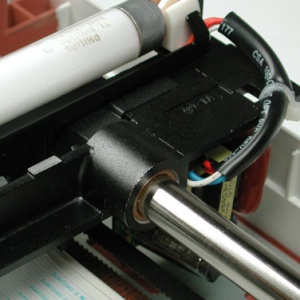 The stabilizer bar is very durable and tightly secured to the body of the scanner.
HowStuffWorks.com

Here are the steps that a scanner goes through when it scans a document:

The filter and lens arrangement vary based on the scanner. Some scanners use a three pass scanning method. Each pass uses a different color filter (red, green or blue) between the lens and CCD array. After the three passes are completed, the scanner software assembles the three filtered images into a single full-color image.

Click on the green Scan button to see the scanning process.

Most scanners today use the single pass method. The lens splits the image into three smaller versions of the original. Each smaller version passes through a color filter (either red, green or blue) onto a discrete section of the CCD array. The scanner combines the data from the three parts of the CCD array into a single full-color image.

Another imaging array technology that has become popular in inexpensive flatbed scanners is contact image sensor (CIS). CIS replaces the CCD array, mirrors, filters, lamp and lens with rows of red, green and blue light emitting diodes (LEDs). The image sensor mechanism, consisting of 300 to 600 sensors spanning the width of the scan area, is placed very close to the glass plate that the document rests upon. When the image is scanned, the LEDs combine to provide white light. The illuminated image is then captured by the row of sensors. CIS scanners are cheaper, lighter and thinner, but do not provide the same level of quality and resolution found in most CCD scanners.

We will take a look at what happens between the computer and scanner, but first let's talk about resolution. 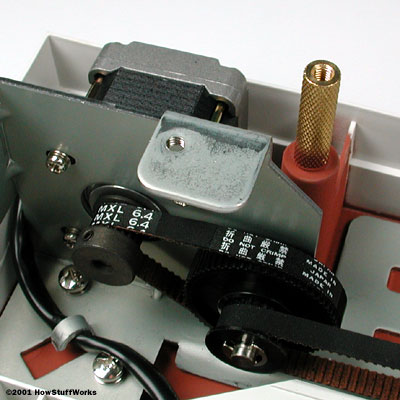 The precision of the stepper motor determines the y-direction sampling rate.

For example, if the resolution is 300x300 dpi and the scanner is capable of scanning a letter-sized document, then the CCD has 2,550 sensors arranged in each horizontal row. A single-pass scanner would have three of these rows for a total of 7,650 sensors. The stepper motor in our example is able to move in increments equal to 1/300ths of an inch. Likewise, a scanner with a resolution of 600x300 has a CCD array with 5,100 sensors in each horizontal row.

Sharpness depends mainly on the quality of the optics used to make the lens and the brightness of the light source. A bright xenon lamp and high-quality lens will create a much clearer, and therefore sharper, image than a standard fluorescent lamp and basic lens.

Of course, many scanners proclaim resolutions of 4,800x4,800 or even 9,600x9,600. To achieve a hardware resolution with a x-direction sampling rate of 9,600 would require a CCD array of 81,600 sensors. If you look at the specifications, these high resolutions are usually labeled software-enhanced, interpolated resolution or something similar. What does that mean?

Interpolation is a process that the scanning software uses to increase the perceived resolution of an image. It does this by creating extra pixels in between the ones actually scanned by the CCD array. These extra pixels are an average of the adjacent pixels. For example, if the hardware resolution is 300x300 and the interpolated resolution is 600x300, then the software is adding a pixel between every one scanned by a CCD sensor in each row.

Another term used when talking about scanners is bit depth, also called color depth. This simply refers to the number of colors that the scanner is capable of reproducing. Each pixel requires 24 bits to create standard true color and virtually all scanners on the market support this. Many of them offer bit depths of 30 or 36 bits. They still only output in 24-bit color, but perform internal processing to select the best possible choice out of the colors available in the increased palette. There are many opinions about whether there is a noticeable difference in quality between 24-, 30- and 36-bit scanners. 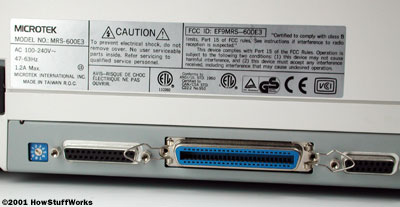 A scanner may have more than one way of connecting to your computer.

Scanning the document is only one part of the process. For the scanned image to be useful, it must be transferred to your computer. There are three common connections used by scanners:

On your computer, you need software, called a driver, that knows how to communicate with the scanner. Most scanners speak a common language, TWAIN. The TWAIN driver acts as an interpreter between any application that supports the TWAIN standard and the scanner. This means that the application does not need to know the specific details of the scanner in order to access it directly. For example, you can choose to acquire an image from the scanner from within Adobe Photoshop because Photoshop supports the TWAIN standard.

In addition to the driver, most scanners come with other software. Typically, a scanning utility and some type of image editing application are included. A lot of scanners include OCR software. OCR allows you to scan in words from a document and convert them into computer-based text. It uses an averaging process to determine what the shape of a character is and match it to the correct letter or number.

For more information on scanners and related topics, check out the links on the next page.

TWAIN is not an acronym. It actually comes from the phrase "Never the twain shall meet" because the driver is the go-between for the software and the scanner. Because computer people feel a need to make an acronym out of every term, TWAIN is known as Technology Without An Interesting Name!