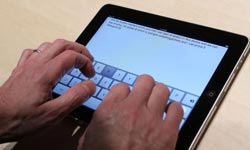 You can do so much more on a iPad than merely type!
Justin Sullivan/Getty Images

If you're an iPad user -- or perhaps thinking about becoming one -- you've probably considered the various ways the device can make your life a little more fun. Sure, you can read books, play games or watch movies, but what about using your iPad to organize your life?

The market for personal productivity apps has positively exploded since the iPad first came on the market in 2010. App developers have seized on the iPad as a tool that's portable and flexible enough to accomplish the many different things people need to get done on a daily basis.

So, where to begin? Look no further than this list of 10 iPad apps for personal productivity.

The Notes Plus app for iPad ($4.99) is a great way to take notes in whatever form suits you best. Whether it's by hand, typing or audio recording, Notes Plus can accommodate you; it's even possible to switch from one method to another and back in one note-taking document. You can use either your finger or a stylus, depending on your preference, and Notes Plus will convert your writing into the font of your choice. You also have, among other things, the ability to erase text, rearrange it or italicize certain lines. Then, when your notes are all in order, you can e-mail them to the world.

While some folks are happy to use their fingertips to control the iPad screen, others prefer to use a stylus, particular for handwriting. In an article for iMedical Apps, Dr. David Ahn reviewed seven different styluses. Check out his article to see which stylus might be right for you. 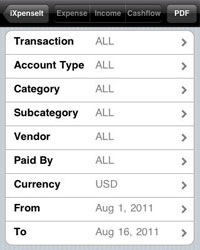 The iXpenseIt app allows you to track expenses by date, transaction type, amount and more.

Few of us truly like figuring out our expenses and planning a budget. But with the help of your iPad, such chores can be a lot less painful. Consider an app like iXpenseIt ($4.99 for full version, free for iXpenseIt Lite), where you can track your spending according to type or by date. iXpenseIt is particularly useful if you accrue a lot of expenses for work: The app allows you to record mileage and also has a picture-taking feature to compile receipts. It even generates reports for easier reimbursement from your employer. Plus, the app is password protected -- always a good idea where financial matters are concerned. However, a downside to iXpenseIt is how very detailed it is; it takes a bit of work to really get the most out of the app [source: TiPb]. But when it comes to your finances, details are key, and this app can help you sort them out.

The rise of digital photography means that our vacation pics can number in the thousands. Sorting through that many snapshots -- much less sharing them with friends and family -- can be so daunting that it never gets done at all.

Fortunately, there are a number of iPad apps devoted to the organization and dissemination of digital photos. Sort Shots ($5.99 at the app store) offers a wide variety of features to help get your pictures in order. For example, you can tag your photos with keywords, either individually or in groups. If you're already using photo management software on your home computer, Sort Shots can import many of the ratings and keywords from those programs. (Check here for a list of compatible photo editing software.) Then, once you've sorted, tagged and rated your pics to your heart's content, Sort Shots lets you export them to Facebook, Twitter, Picasa and Flickr; you can even make a slideshow of your pictures using music from your tablet's library [source: Pad Gadget].

SugarSync and Dropbox (both free) are two of the most well-known cloud storage apps available for the iPad. Both allow you to upload files or photos from your tablet and access them later on another device, such as a computer or your iPhone. Whether you opt for SugarSync or Dropbox really depends on what you want from your storage provider. While both apps have their strong points -- Dropbox offers better security, while SugarSync has a better sharing model -- those looking for easy-to-use file storage are probably best suited with Dropbox; tech-savvy users who need some additional features will probably be happier with SugarSync. [source: Smollinger]. Whichever one you choose, you'll have the option to access your files wherever you go.

Cloud storage means that you're saving your files to a remote database. That way, you can save and retrieve data from any computer or device with web access -- and you don't have to carry a memory stick or external drive. Check out How Cloud Storage Works to learn more. 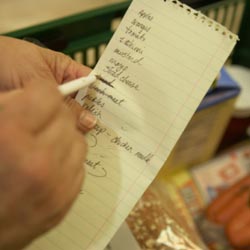 How many times have you made a grocery shopping list and then forgotten it on the kitchen counter? With the ShoppingList app for iPad ($2.99), your odds of making that mistake go down considerably. This app can sort your items according to category (dairy, canned items, etc.), cutting down the number of times you have to go all the way back across the store because you forgot something.

If there's a specific brand name item you need to restock, use the app's built-in barcode scanner while you're at home in your pantry, and you'll have all the relevant info at the supermarket, too. Input prices as you shop, and the app will keep track of your total. Plus, there's an option to e-mail the list to someone else if they're doing the shopping for you [source: Kline]. ShoppingList is a very handy app that will help get you out of the store with minimal fuss -- and home in time for dinner.

One of the most popular iPad apps geared toward personal organization is OmniFocus. At $39.99, it's not cheap, but according to App Advice, OmniFocus is an essential task management app. It organizes your tasks in a variety of ways, including by project (i.e., several related to-do items) or context (all of your at-home tasks, for example). The "forecast" option lets you see your day or week ahead at a glance, allowing you an overall picture of what needs to get done, as well as where and when it needs to happen. The app includes other nifty features like task searchability, voice notes and picture attachments. If you have OmniFocus on your Mac computer or iPhone, you can sync between devices, but it also works well as a standalone for your iPad.

If you've read any articles about personal productivity products, you've probably come across "GTD;" it's an acronym for Getting Things Done, a work-life management system created by David Allen, an executive coach and productivity guru. Those who have implemented this system credit it with helping them lead less stressful, more productive lives.

Scheduling a get-together or event with multiple parties can get complicated. With Doodle ($2.99), it gets a lot easier. Create a poll with possible meeting times, e-mail it to participants and confirm your plans according to the results of the poll. Keep track of multiple events, communicate with your fellow participants on the specific activitiy's page and get at-a-glance poll results. Doodle also has a web-based service that can be synced with your app activities. Doodle is a simple but effective way to coordinate your schedule with friends and colleagues [source: Pauli]. 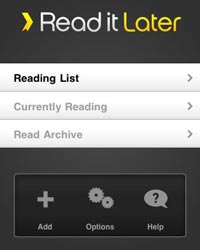 The Read It Later app lets you save content from your favorite online sources to read it at your convenience.

The Internet is an endless source of information and entertainment. While that's usually a positive thing, it can put a bit of a damper on your productivity. How many times have you gone in search of something, only to get sidetracked by something entirely different along the way?

The Read It Later app (there's a free and paid version) allow you to bookmark those diverting tangents, thereby saving them for a later time and keeping you on the task at hand. This app is particularly handy since the links are available offline once you save them -- all of which means that you'll make better use of your iPad time, both online and off.

iPads are nice and portable. As some of the other productivity apps listed here have demonstrated, your iPad can keep you occupied on the bus, remind you what to pick up at the grocery store and help you take notes at meetings. So why shouldn't it help you keep track of your diet and exercise?

MyNetDiary ($9.99) is one of the highest-rated apps for tracking what you eat and how much you exercise. It features a constantly-updated database of different foods -- more than 416,000, as of August 2011, according to iTunes -- so that you can be as specific as possible when entering your meals, thus ensuring more accurate nutritional calculations. The app makes suggestions for improving your diet, based on what you tell it you're eating, and another welcome feature is its library of helpful articles about diet and exercise [source: Greenbaum]. All in all, MyNetDiary is a nicely packaged app that will help keep you on the right track to better health.

Beyond diary apps to track diet and exercise, there are also accessories available for the iPad that can boost your fitness regime. One example is the Wahoo Fitness Adapter Key, which works with compatible heart rate monitors to record your performance for later analysis.

If you're in the market for an all-around organizational tool for your life, check out Bento ($4.99). Bento has 25 different database templates designed for a variety of subjects, including recipes, event planning, vehicle maintenance and contacts. All the templates are customizable, so you can tweak them to suit your specific needs. Bento is a handy place to keep track of all the little (or big) things going on in your busy life. If you have a Mac computer, there's a version of Bento available for that, as well, and you can sync your data between the iPad and computer.