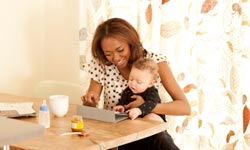 Toddlers are very attracted to the iPad. What apps are best for them?
Tooga Productions, Inc. /Riser/Getty Images

If you type the words "toddler" and "education" into the search bat at Apple's iTunes store, more than 800 apps will appear on your computer screen. Although no formal research has been published on toddlers and iPads, studies have shown that iPads are valuable learning devices for children ages 3 to 7 [source: Worley]. While some experts dispute its value for toddlers, the iPad may yet prove to be an important educational tool for these younger learners.

Toddlers learn through repetition, color recognition and interaction, and the iPad's interactive design reinforces each of these aspects of learning. iPads are immediately responsive and patient devices, and their large touch screens are easy for toddlers to use as they develop their fine motor skills. iPad app designers are developing apps that appeal to parents of toddlers who are seeking to give their children an entertaining toy while providing them with an opportunity to get a head start on learning during one of the most important stages of their development.

In this article, we'll look at 10 great iPad apps for toddlers.

Toddlers can use the Talking Gina the Giraffe app to talk to and feed their pet giraffe, Gina. Gina will repeat the words and noises she hears. Toddlers enjoy speaking to Gina and hearing her repeat their words or sounds. The more frequently they interact with Gina, the more cheery she'll be. For example, when Gina is 70 percent happy, she gives you a balloon and repeats words in a funny voice; when she is 90 percent happy, she gives you kisses.

You can feed Gina a variety of snacks and drinks such as carrots, strawberries, ice cream, water and lemonade. Although the app and some snacks are free, you'll need to pay to download others. You can also play a patty-cake hand clapping game with Gina, an activity that helps improve toddlers' hand-eye coordination. This part of the app features 32 levels at three speeds per level.

Moo, Baa, La La La! is an interactive digital book app. Costing $2.99, this app offers all the appeal of a traditional pop- up book but with even more interactive opportunities for toddlers. Toddlers listen as the story is read aloud while words are highlighted on the screen, a feature that helps them learn how to recognize letters and words. By touching the screen, toddlers can select an animal and hear the noise it makes. This feature will help them learn to identify animals and animal noises.

This app is particularly fun for toddlers because they can play an active role in the story. For example, they can help a confused chicken raise the curtain for a performance of some dancing pigs, and they can change the time of day by touching the moon or sun.

When is your child old enough for an iPad?

Although iPads have the potential to be valuable learning tools for toddlers, doctors recommend that children under the age of 2 first learn through real world interactions using all of their senses. By age 3, children are ready to use electronic media. [source: Brown]

Clickysticky, an interactive sticker book app that costs $1.99, allows toddlers to interact with characters as they learn about objects such as airplanes, fish and animals. Every sticker character can be rotated, scaled and dragged into an imaginary scene. Themes include space, dolls, dinosaurs, ocean, aviation and safaris. Toddlers will have so much fun using their imaginations to build fun and interactive scenes.

To use the app, tap and hold a sticker, and then drag it into the scene. To remove a sticker, double tap it and tap the arrow icon. Shake the iPad to remove all of the stickers. The designers of this app frequently update sticker book scenes, and you can download new scenes at no additional cost.

Shape Builder allows toddlers to move shapes that snap into puzzles. Each puzzle has five to 10 pieces, and after the puzzle is completed, the image is revealed and a voice announces the name of the image. This app teaches toddlers fine motor skills and cognitive thinking while showing them commonly used objects such as musical instruments, food, animals and letters of the alphabet. It costs 99 cents, but a free lite version is also available for download.

The app includes 146 puzzles that teach toddlers the names of 30 instruments, 17 fruits and vegetables, 37 animals, 26 letters, 20 numbers and 16 other items such as policemen and firefighters.

A recent survey found that 25 percent of toddlers will have used a smartphone by age 2 [source: Basulto].

I Hear Ewe is a free iPad app that is very simple but also very appealing to young toddlers. The app shows cartoon pictures of 24 animals and 12 vehicles. When you touch a vehicle or animal, a voice on the app will announce the name of the object and play a recording of the sound that the object makes. The app helps toddlers to learn the names of common animals and vehicles and helps them to associate animals and vehicles with the sounds they make. By tapping the screen, your toddler will develop hand-eye coordination and motor skills. The app has English, Spanish, German and Chinese language features. 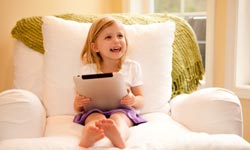 Pat the Bunny is a high-tech spin on the classic children's touch and feel interactive book first published in 1940. Costing $3.99, this app features 14 interactive scenes that toddlers explore by tapping and swiping the screen. Toddlers play hide and seek with Bunny, pop bubbles in the bathtub, catch butterflies in a garden, play music in the kitchen and even see their own reflection in a mirror.

Dr. Seuss's ABC teaches toddlers who are just starting to learn their ABCs through the humorous words and pictures. Costing $3.99, this app focuses on Dr. Seuss's original artwork while allowing toddlers to practice word association. As a voice reads the story, words are highlighted. When you touch a word on the screen, it zooms up, and the word is pronounced.

The app includes "Read to Me," "Read It Myself" and "Autoplay" features. The Autoplay feature reads the story aloud while toddlers follow along, allowing them to develop letter and word recognition skills. This app is great for long car rides with a toddler. In fact, it won a 2011 Parents' Choice silver award. 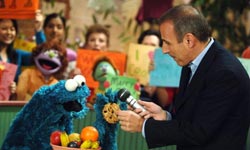 With the PBS Kids Video iPad app, toddlers can watch their favorite PBS television shows with the tap of a screen. Through this free app, PBS posts more than 1,000 television shows and cartoons. Toddlers can browse through programs such as "The Cat in the Hat," "Curious George," "Elmo" and "Arthur" anywhere where they have a strong WiFi or 3G signal. Each week, a "Weekly Pick" is introduced that is designed to teach children reading, math and science. Resources for parents give more information about the shows' intended age group and learning goals, and allow them to add videos to their child's list of favorites.

Monkey Preschool Lunchbox, costing 99 cents, is a fun app for toddlers where they help a monkey pack a lunch box. The app features lots of sounds, colors and varieties of fruits to pack and seven games that teach kids about colors, letters, counting, shapes, sizes and matching. As you play with the app, a voice announces names of colors, letters and fruit, helping to acquaint toddlers with commonly used words. When you’re having trouble with a task, the cute monkey comes to your aid and gives you sticker rewards when you win.

Once Upon a Potty

In addition to teaching toddlers colors, shapes and letters, the iPad can be used for another important part of toddler development: potty training. The Once Upon a Potty app, costing $2.99, introduces toddlers to potty training basics. The app focuses on building confidence in toddlers who are making the major developmental step from diaper to potty.

Available in versions for girls and boys, this app, based on Alona Frankel's books, teaches toddlers the names of body parts and functions and potty training terms through word association, text highlighting and sounds effects. The story can be narrated through "Read to Me," "Read It Myself" or "Autoplay" features. It also includes a potty training song that toddlers can sing along with to help them remember when they need to use the potty.

How should I choose an app for my toddler?

Make sure that the app offers a good combination of entertainment and education. Look out for apps that are marketing to your child; some apps might appear to be free but actually link to costly additional downloads that are required to play the app. And be sure that the app is developmentally appropriate for your child. After all, not all 3-year-olds are the same. [source: PBS].