Under the PlayBook Hood 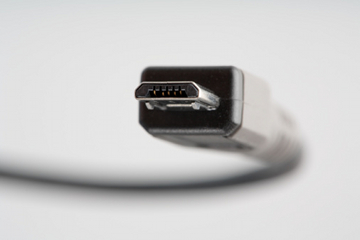 The PlayBook can connect to a computer using a cable with a MicroUSB connector like the one seen here.
Hemera/Thinkstock

RIM has provided two options for charging a PlayBook. The first uses an industry standard: MicroUSB. With the right cable, you can connect a PlayBook to a computer or adapter, or you can transfer data across devices. The second way to charge a PlayBook is to use a magnetic system. The cable for this system attaches to the device with a magnet. A gentle tug is all it takes to disconnect the cable, which helps prevent accidents when you forget your tablet is still plugged in. But there's one downside to the magnetic option -- you can't transfer data across the cable.

If you popped open a BlackBerry PlayBook, you'd notice a few things straight away. First, you just voided your warranty. Second, RIM has packed the guts of the PlayBook in a tiny, efficient package. Third, unless you send in your PlayBook for repairs you won't be replacing the 20-watt-hour battery anytime soon.

The brain of the BlackBerry PlayBook is a Texas Instruments OMAP 4 dual-core processor running at 1 gigahertz. This is a chip Texas Instruments designed specifically for smartphones and tablets. The chip has enough power to drive multimedia applications without generating too much heat. The transistors on the chip are on the 45-nanometer scale, which is the same scale of the transistors you'll find -- if you have a scanning electron microscope -- on Intel's Nehalem microprocessor.

The PlayBook has a 1-gigabyte DRAM chip from Elpida. It also has a SanDisk Flash memory card for long-term storage. There are three versions of PlayBooks available at the time of this article: 16, 32 and 64 gigabyte models, available at $499, $599 and $699, respectively.

Other chips inside the BlackBerry PlayBook include a power management chip and a Bluetooth/WLAN/GPS/FM receiver, all from Texas Instruments. There's a graphics processing chip from STMicroelectronics and an audio chip from Wolfson. The BlackBerry uses a Bosch Sensortec 3-axis accelerometer and an Invensense 3-axis gyroscope to determine its orientation.

The PlayBook has four speakers. Interestingly, these speakers don't connect to the motherboard with wires. Instead, the PlayBook's assembly allows the speakers to rest against pressure contacts on the motherboard itself, creating a direct connection [source: iFixit].