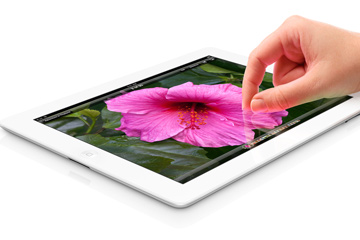 The new Apple iPad -- is it worth your money?
Courtesy Apple Inc.

Are you a gadget addict? If you're reading this, chances are you're not too far gone, or you'd already have your hands on the new iPad. Apple simply calls the latest incarnation of the wildly successful tablet the iPad but that's a bit confusing. We'll refer to it as the iPad 3.

Apple's sales track record with the iPad has been nothing short of amazing. During Apple's third quarter financial results for 2012, the company announced it had sold 17 million tablets [source: Apple]. Consider for a moment that before Steve Jobs introduced the first iPad in 2010, no company had managed to make a tablet device that saw wide consumer adoption. Today, tablets are a vital part of the mobile electronics market.

Apple has introduced a new iPad each year since the first model hit store shelves. Each time, hundreds of customers have lined up to be one of the first people outside of Apple to get one in their hands. But is the latest model of the iPad worth your money?

We're going to assume that you're interested in buying a tablet in the first place. With that assumption out of the way, we'll need to narrow down a few more factors. How do you plan to use the tablet? Where is all your data now? Do you already own an older iPad? 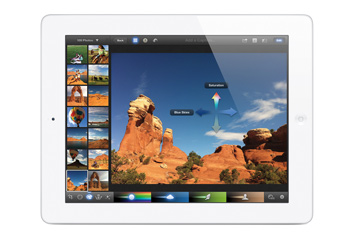 The iPad Face Off 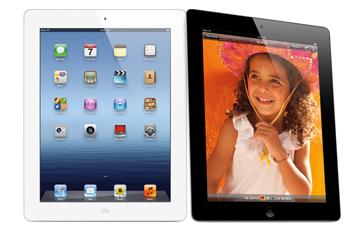 Whether or not the iPad is worth buying boils down to what you want out of a tablet.
Courtesy Apple Inc.

It helps to take a quick look to compare the differences between the iPad 2 and the iPad 3. One big difference is choice. While Apple originally offered several models of the iPad 2 for sale, the only models currently available in the Apple store are the 16-gigabyte models. One model is WiFi only. The other has WiFi and 3G connectivity, but requires a separate data rate plan with a cellular provider -- AT&T or Verizon in the United States.

The new iPad has more options. You can buy WiFi only or WiFi and 3G models with 16-, 32- or 64-gigabyte capacity. Another big difference is price -- the iPad 2 is less expensive than the new iPad. If you're on a budget, an iPad 2 might be the best choice.

From a hardware perspective, the new iPad has a few advantages over its predecessor. The processor in the new iPad is a more powerful version of the A5 chip found in the iPad 2. The new chip is a quad-core processor, giving the new iPad a bit more horsepower. This helps guarantee that apps will run smoothly on the device.

Screen resolution is also a differentiator. The iPad 2's resolution is 1024 by 768 pixels. The new iPad ups the ante with a retina display resolution of 2048 by 1536 pixels. Both tablets have the same screen size. That means the new iPad can produce much sharper images than the iPad 2.

Other new features include a beefed-up rear-facing camera, face-detection software for still images and compatibility with Apple's AirPlay product. In general, the difference between the iPad 2 and the new iPad comes down to processor speed, camera quality and screen resolution. So is the iPad 3 worth your money?

If the advantages of the iPad 3 sound good to you, then it's a good purchase. The iPad has proven itself to be a useful and popular device. Apple's library of apps is second to none and it grows larger every day. But if you aren't as concerned with screen resolution and can't imagine yourself using a tablet to take photos, the iPad 2 or even a non-Apple tablet may be the right choice for you.

It's also important to remember that Apple may continue the trend of introducing a new tablet device each year. If that happens, we should expect to see a new iPad announced in the spring of 2013. And there are more rumors that Apple will introduce a smaller 7-inch (17.8-centimeter) version of the iPad in the near future. People who prefer a slightly smaller tablet might want to wait and see if those rumors pan out.

Ultimately, whether or not the iPad 3 is worth buying boils down to your needs and preferences. What's definitive is that Apple continues to produce compelling and attractive tablets.

I don't own an iPad, but my wife does. She stood in line in Austin, Texas, during our visit to South by Southwest to purchase an iPad 2 in the special store that popped up just for the event. When the iPad 3 came out, she considered buying it but decided the new features weren't quite compelling enough to push her to upgrade. As for myself, I own a Nexus 7 Android tablet, but I like to think I don't have an anti-Apple bias.