Which iPad is best for me? 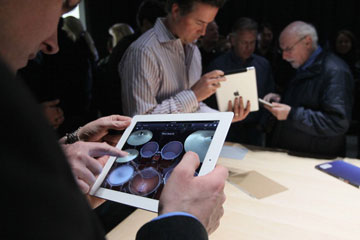 You might not need the extra features of the iPad 2 -- play with both models before you choose the one that suits your needs best.
Justin Sullivan/Getty Images

Now that you know the differences between the two, your decision as to which iPad to purchase basically comes down to how you will use it. If you're a business owner who sees an iPad as a solution for staying in touch with your team while on the go, for example, the iPad 2's dual cameras, and subsequent ability to let you videoconference from anywhere with a wireless signal, could be a deal-maker that prompts you to go with the new version. The same can be said if you're someone who typically pushes your computers and mobile devices to their limits with applications and software that use every bit of the available processing power. If you tend to buy extra memory as standard practice when buying a new computer, then the iPad 2 with its 64 GB is probably your best bet.

There are many users, though, who will probably be able to do everything they want to with the first-generation iPad. That device is a powerful tool for surfing the Web, playing videos, reading e-books, and staying in touch with friends via e-mail and social media. If that list covers most of what you intend to do with your iPad, then it's well worth your time and money to see if a first-generation model will work for you. Apple's decision in spring 2011 to lower the price of the first-generation iPad by $100 could help make your decision as well: With the price lower than ever, the original iPad is a capable and attractive option for users considering one of these groundbreaking tablets.

For more iPad and tech articles, check out the links below.