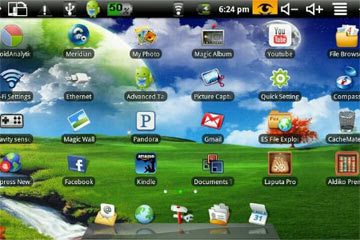 I like things cheap. I like things on sale. I like things that are perfectly acceptable at a low price as opposed to extremely good at a high one. And I know that many other penny-pinching people are with me. (Really with me -- they seem to surround me just as I'm attempting to grab the last slightly warped, as-is clearance set of wine glasses at the outlet mall.)

This tendency is fantastic when you're buying, say, T-shirts at your local Goodwill. It's not so terrific when it comes to technology. For one, new technology is expensive. Period. It costs a lot to develop and a lot of salaries to make. Plus some, for profit. Two, cheap technology just doesn't work as well. With every tech advancement, we expect higher performance from the technology we buy. But consumer electronics companies and tech giants are totally aware that there are customers like me, who want the technology ... but want a deal.

Enter a company like Maylong. The Maylong Group is a company based in Michigan, and is best known for making GPS systems. The company is relatively new -- just founded in 2006 -- and its foray into tablets is even newer. The first tablet, the M-150 model, came out in 2010. It had the unique distinction of being a tablet sold at Walgreens -- a drugstore known more for picking up nail polish and prescriptions than personal technology. As we'll discuss later, it was not popularly embraced, to say the least.

But it was $99, a price point that -- at the time -- was nearly impossible to beat for a tablet. And although Maylong became a kind of epithet among tech writers and geeks, the company continued producing tablets. And guess what? The technology got more competitive. The aesthetics became more cohesive. And, ostensibly, user feedback was listened to.

Not that Maylong tablets are perfect. But let's take a look at what they offer to find out what's worth it and what may be worth walking by.