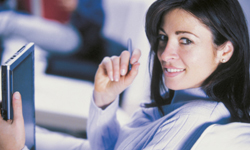 Tablets are designed to appeal to people who will take them everywhere and load them up with apps that promise to deliver convenience.
Comstock Images/Thinkstock

The tablet faction of mobile gadgets is still somewhat undefined -- it's a smartphone that doesn't really make calls, a netbook that doesn't close without a flip-open case. But tablets are designed to appeal to people who will take it everywhere, who tend to be the kind of people who don't want to waste a second, who, it stands to reason, are the kind of people who will load up tablets with apps promising to deliver convenience. Software developers, for their part, tend to refer to this type of software as "productivity," and the offerings of Android Market are no exception.

The Android tablet app market might not be growing as quickly as its fans have expected -- as of early July 2011, there were 232 Android tablet-specific apps available to the iPad's 90,000-plus options [source: Pogue]. Since Android developers tend to favor content over style, though, some of these offerings provide considerable benefits for Gingerbread- or Honeycomb-toting busy bees.

Part of the problem with quantifying Android tablet apps and discovering the jewels of the bunch is that there are different versions of the Android operating system designed to work on different service carriers' tablets, and as a result, a lot of apps are not universal. For the sake of simplicity and, well, convenience, we focused on discussing apps that aren't limited to specific manufacturers' devices. Keep reading to find out about Android tablet apps that might make life a little less complex.