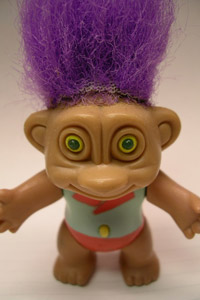 Internet trolls were named after a fishing technique, but they also share the mischievous qualities mythical trolls are said to possess.
stock.xchng

In "Star Wars: A New Hope," Obi-Wan Kenobi described the spaceport of Mos Eisley as a "wretched hive of scum and villainy." Many people might say the same thing about troll communities and forums. Within these communities, anything goes. It's very difficult to hold a discussion on any subject that actually has merit. Any attempt to do so will likely be sidetracked as the thread fills up with crude jokes, insults and pornographic images.

Normal online communities usually have a team of administrators or moderators who try to keep the peace and make sure the community runs smoothly. These officials sometimes ban trolls if they prove to be disruptive. Troll communities rarely ban members -- in fact, several of them explicitly welcome people who have been banned by other communities. Often, the community leaders claim that they value free speech too much to censor members or ban people.

What goes on in these communities? In general, many of them have forums filled with jokes, pornography and discussions about trolling activities. Trolls will brag about their exploits, linking to message board discussions that dissolved into flame wars. Sometimes trolls will cause such a fuss that the entire community shuts down as a result. Some trolls compete with one another to see how long it takes before an administrator bans the troll from a specific community. The winner might be the troll who remained part of a community the longest or it might be the person who went from registration to banned in the least amount of time.

Trolls also use these communities to discuss the sites from which they were banned. Usually the discussion is little more than a series of accusations and insults directed at the community that banned the troll in the first place. They may also use the community to organize concentrated trollish attacks on another site.

While there are online communities built and run by trolls, there are a few message boards and forums that tolerate trolls but aren't designed as a troll community. One of these is 4chan. The 4chan site is an image-based online bulletin board. Today, the main focus of 4chan is on Japanese culture and animation, though there are other sections as well. When 4chan began, it started as a general message board on which members could post anything (other than child pornography). That policy still holds true for 4chan's most popular channel, the Random (or /b/) channel.

Activity on the Random channel is unpredictable. Many posts contain vulgar language or images of pornography or violence. Contributors are anonymous, which means there is no sense of accountability within the forum. There's no need to create a login handle or register -- you can visit the channel and post whatever you like. As a result, trollish behavior runs rampant on the channel.

Trollish activities sometimes extend beyond the realm of the Internet. We'll look at some real world controversies caused by trolls in the next section.