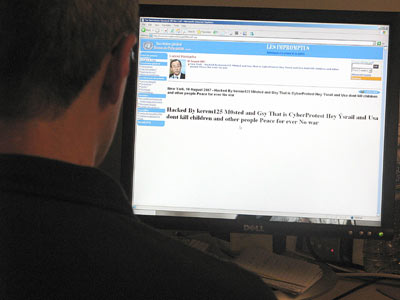 Trolls can also be crackers, some of whom use their skills to deface Web sites like this UN page.
Karen Bleier/AFP/Getty Images

The first step to dealing with trolls is learning how to recognize them. The following traits are clues:

If the answer to these questions is yes, there's a good chance you're dealing with a troll. Whether the member is consciously trying to troll the community or not is another matter. There are times when even respected members of an online community might behave like a troll. But if it's a new member who is very active and displays these qualities, you've probably got a real troll on your hands.

What do you do? If you're simply a member of the community, the best a­dvice is to ignore the troll. The troll's goal is to disrupt the community and rile up its members. By ignoring the troll, you deny him or her a victory. There's a common phrase that dates back to the early days of Usenet: Don't feed the trolls. Trolls love attention -- depriving them of it usually means they'll lose interest and move on to a different community.

If you're the administrator of an online community, you have a few other options. One option is to ban the user from the community. Sometimes this is the goal for the troll all along. But that shouldn't concern you -- you need to focus on your community and its legitimate members.

If you think the troll isn't necessarily trying to cause strife within your community on purpose, you can try a different tactic. Pay the troll a compliment, thanking him or her for participating in your community. Ask the troll to participate in discussions and present his or her points. If the troll really is trying to cause a problem, this is the opposite reaction he or she wants. On the other hand, if the person isn't trying to be a troll at all, he or she may become a valuable member of the community.

The important thing to remember is to remain calm and civil. If you lose your temper, the troll wins. You become the butt of the troll's joke. Some trolls won't let it rest there -- they'll go to other communities and spread word of how they managed to push your buttons and make you blow your top. Don't give them the satisfaction.

So why would anyone behave like this in the first place? We'll look into that in the next section.