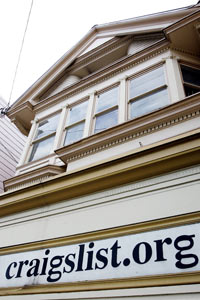 Sites like Craigslist are meant to be open communities, but that sort of policy can also attract lots of trolls.
Justin Sullivan/Getty Images

Some people troll others as part of a personal vendetta. This is also known as cyberbullying. The troll might taunt the victim in various online communities, use the victim's e-mail address to sign up for spam e-mails or even impersonate the victim in order to discredit him or her. In extreme cases like the family feud in Washington, the troll might post information online that leads to direct physical consequences.

Other trolls want to promote their own agendas by undermining an online community. The clearest example of this is on a political forum. A troll might use manipulative tricks to sabotage a legitimate discussion or to discourage community members from supporting a specific political figure.

But the trolls that seem to be the most puzzling are those who have no personal agenda or vendetta against anyone. For them, trolling is an end unto itself. The goal is just to frustrate people and to build the troll's reputation as a troublemaker. Or could there be more?

Mattathias Schwartz of The New York Times interviewed several trolls, including the infamous Jason Fortuny. The trolls offered various reasons for trolling beyond just a desire to victimize people online. Some claimed they wanted to teach people a lesson about how harsh the online world can be. In other words, they felt it was for the victims' own good. Others tried to justify their actions by pointing out how rough their own lives had been in the past [source: Schwartz].

The very nature of the Internet might contribute to trollish behavior. The Internet gives people the opportunity to remain anonymous. That means the average user has very little sense of accountability while online. It's easy to forget (or ignore) the fact that on the other end of the connection is a real human being with real feelings.

Trolls sometimes make fun of their own motives. In the Encyclopedia Dramatica, a very popular wiki in troll culture, there's an entry that claims that the American Psychiatric Association will include "Internet troll personality disorder" in the next edition of the Diagnostic and Statistical Manual of Mental Disorders. The entry then goes on to list the "diagnostic criteria" for the disorder -- many of which paint trolls in a positive light.

Elsewhere on the Web is what appears to be a scholarly paper written by an "Amy Dhala" about a supposed focus group study of trolls. But while much of the paper contains language that on the surface appears legitimate, there are entire sections­ that drop the scholarly voice completely. It becomes clear by the end of the paper that the entire work is a piece of fiction -- written by a troll.

The very nature of trolls makes them difficult to peg down. When are they being deceptive? Do they believe they are online vigilantes and guardian angels, or are they selfishly exploiting others for their own enjoyment? How many are teenagers or younger? It's impossible to know for sure, though that doesn't stop people from making guesses and generalizations.

In the end, it's probably just best to avoid engaging with trolls altogether. It'll save you a lot of frustration and wasted time. And it annoys the heck out of the trolls.

To learn more about trolls and other topics, lurch over to the links below.

I Did It for the Lulz

Some trolls say they harass people just because it's funny. They are after lulz -- a variation of "laugh out loud" or LOL.