Browse the article How Tumblr Works 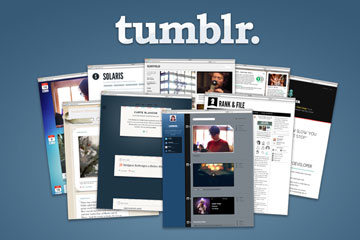 Tumblr is one of the most popular microblogging sites.
Tumblr.com

Tumblr is a network of millions of user-generated, personal Web sites. It's part blogging platform (like Wordpress, Blogger or Posterous) and part social networking service, letting users create and post their own original content. Written entries, photographs, video clips or links to other Web sites -- you can share all of these things with your friends and followers. Users subscribe to as many other users' pages as they like, which show up on the user's feed, or Dashboard. It's also possible to give "notes" to other subscribers in several forms -- you can reblog someone's content on that user's Tumblr site, "like" it, or reply. To further the social aspect, authors can opt to post their Tumblr entries simultaneously, or at least link to them, via other services, such as Facebook, Twitter and Instagram.

Tumblr refers to itself as a platform for short-form microblogging, also known as tumblelogging, a name that predates Tumblr itself. As of 2012, Tumblr hosts more than 64 million "tumblelogs." More than 13 million people visit Tumblr a month, most of them with their own active blogs. Each day, 25,000 new users sign up for the site, and altogether, 71.6 million new Tumblr blog entries, photos, videos and audio files are posted each day. Although you don't have to be a registered user of Tumblr to read others people's Tumblr blogs, you do have to be registered if you want to leave notes.

Tumblr went live in 2007, launched by Internet entrepreneur David Karp and lead designer Marco Arment. Within two weeks, 75,000 people had jumped on to Tumblr to enjoy a site that's not much different than it is today. In 2009, the company bought third-party app Tumblrette, which allowed a simplified interface with Tumblr on the iPhone. It's available as an app on all major smart phones today.

How do you start your own blog on Tumblr? It's not hard at all. Read on to learn more.

How to Use Tumblr

Using Tumblr is as easy as using e-mail -- which is how a Tumblr account is created. Simply sign up with an e-mail address and a password, choose a user name, and start blogging. (The user name does not have to be the same as the blog's title, by the way.) On the user's blog entry page (accessible via the Dashboard, which we'll talk more about in a second), Tumblr guides the blogging process with icons for text, photo, quotes, links, chat, audio or video. Click on the correct one, enter in the materials, and then click "post" at the end (or, queue it, or set it to run on a specific date).

But Tumblr is a social network, too. Tumblr users connect by subscribing to other Tumblr blogs. This way, anytime an author updates with a new article, picture, video or shared item, it shows up in the Dashboards of his or her subscribers. The Dashboard is Tumblr's main interface. Similar to a Facebook news feed, it plainly displays, in reverse chronological order (most recent at the top), all activity by the user and the blogs he or she follows. (Tip: scroll through posts easily by pressing the "J" key while in the Dashboard.)

From the Dashboard, users may give "notes" to the posts they enjoy most. They can do this in several ways:

On the Dashboard, each post has a little box with a number in it -- that's a tally of how many total notes have been given. Clicking on that number unfurls below the post, which shows which users have noted the post, and how. (Visiting the sites of people who liked the same thing that you did is a great way to find new Tumblr blogs to follow.) A sidebar demonstrates how many posts the user has liked, as well as blogs he or she follows and suggestions as to other blogs the user might like. (For a small fee, Tumblr will feature your blog, either on the sidebar, or by pegging it to the top of subscribers' dashboards for a certain period of time.)

The blog's got content. But how should it look? Read on to learn about customization. 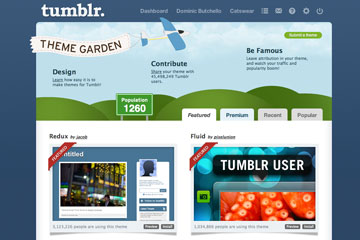 Tumblr users see the blogs that they subscribe to, as well their own posts and notes, on the Dashboard interface. But the public "face" of a Tumblr blog goes out to the whole of the Internet (unless privacy features are enabled), which means that they require some cosmetic maintenance. Users can fully customize their Tumblr sites, changing the colors and fonts, how pictures are displays, where modules are presented, and so on. Tumblr makes it easy for the non-computer coder to do so by offering dozens of free site templates, which it calls "Themes."

Here's how you set up a theme. First, go to your site's page on the Dashboard. Then, open the "customize theme" module. Tumblr provides a pull-down theme menu, with thumbnail images of themes currently available, many designed by other Tumblr users. Based on what you'll be using your Tumblr for, there are several theme options available. A blogger can choose from single, double or triple column (for a text-heavy, photo-light newspaper layout), or high-resolution (for a photo-dominant blog), for example. Most themes are free, although Tumblr does sell "premium" themes.

Once you find a theme you like, you can install it with the push of a button. With a dummy example page, you're then free to explore the customizable features. From this page, you can change the background color (or pattern, or an uploaded image), entry text size and color, the site's title and description, and even how many older entries you want displayed your page. (It also allows for user-generated code injection.) You can fiddle with anything here. Beyond the click-and-make-it-happen interface, all themes and all customizable features can also be altered with HTML editing, for the more code-savvy blogger or blogger who wants a very specific look out of his or her page.

One more thing you can put on your Tumblr page: music. Read on to see how.

How to Add Music to Tumblr

Part of the fun of Tumblr is that blogs and posts are customizable to the unique specifications of the user: Pictures and text are a big part of the experience, of course, but music can be added to a Tumblr site, as well.

The easiest way to share music is by composing an audio post. On the user's navigation page are a number of post options – text, video, chat and audio. Simply press the icon that looks like a purple pair of headphones. That takes the user to a new blog post window. Instead of offering an empty space for a title, Tumblr presents an empty bar with a magnifying glass icon, into which you can upload a music file (in MP3 format, 10 MB in size or less) from the user's computer, or a URL of a song from somewhere on the Internet. Tumblr has partnered with Spotify and Soundcloud for this feature. Spotify is a free or premium service that allows access to hundreds of thousands of songs from major and independent labels, while Soundcloud has tons of user-generated and uploaded songs, many from unsigned or independent bands. Both services allow users to share songs in the form of a Web address, which is easily entered into the audio post window of Tumblr.

Tumblr also offers automatic, autoplay background music. This means that, if enabled, the music plays on every page of the Tumblr user's blog. How it's done: The user utilizes a third-party plug-in, such as Hypster or Grooveshark. Bloggers upload the music they want, and the application renders it as HTML code. That code is then transplanted into Tumblr, in the user's theme customization portal. (It also allows users to place an opt out of autoplay button somewhere on the blog.) If the user wants the autoplay only on a specific post, it's done in the HTML editing display when composing an individual post.