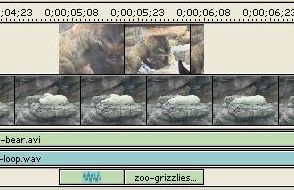 The timeline with a split-edit in it

Any TV program or movie that you see today contains B-roll. In the vernacular, A-roll is raw footage where there is a person on-screen talking. B-roll is everything else. If you were to film a high school play, the raw footage would be almost pure A-roll. On the other hand, a nature documentary can be created with nothing but B-roll, and then a narration is laid over the top of it. If you are creating a movie that explains something, it is very common to use B-roll to provide close-ups of the thing you are explaining. You see this technique all the time in any video that HowStuffWorks creates.

The process of cutting a piece of B-roll into a piece of A-roll is often referred to as a split-edit. For example, earlier in this article we talked about a scene where someone is talking on camera about an emotional topic. In the middle, the director cuts to a tight shot of the person's hands holding a Kleenex. During the scene, you see the person talking, then the Kleenex, and then return to the person's face, and the sound track is uninterrupted by the B-roll.

To add B-roll and create a split-edit in Premiere, you simply add the B-roll footage to the time line using video track 2. Premiere's protocol is to use whatever video is in the highest numbered track when playing the movie. For example, let's say you set this up:

In some cases, you want to completely discard the sound track of the B-roll. Right-click on the B-roll and select "Split Video and Audio." Then click on the audio portion and delete it. Or you may want to eliminate the sound in the original footage. We'll see how to do that easily in the next section.