Equipment Used in a VPN 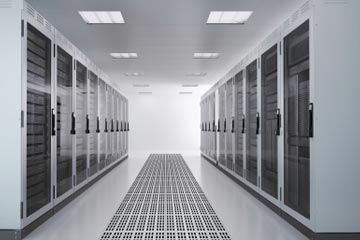 A large corporation might deploy its VPN alongside other network equipment at a co-location facility or data center like the one shown here.
©iStockphoto.com/senticus

While a VPN can be configured on generic computer equipment such as standard servers, most businesses opt for dedicated equipment optimized for the VPN and general network security. A small company might have all of its VPN equipment on site or, as mentioned earlier, might outsource its VPN services to an enterprise service provider. A larger company with branch offices might choose to co-locate some of its VPN equipment, meaning that it will set up that equipment in a co-location facility (or colo). A colo is a large data center that rents space to businesses that need to set up servers and other network equipment on a very fast, highly reliable internet connection.

As mentioned earlier, there is no standard that all VPNs follow in terms of their setup. When planning or extending a VPN, though, you should consider the following equipment:

One widely used standard for AAA servers is Remote Authentication Dial-in User Service (RADIUS). Despite its name, RADIUS isn't just for dial-up users. When a RADIUS server is part of a VPN, it handles authentication for all connections coming through through the VPN's NAS.

VPN components can run alongside other software on a shared server, but this is not typical, and it could put the security and reliability of the VPN at risk. A small business that isn't outsourcing its VPN services might deploy firewall and RADIUS software on generic servers. However, as a business's VPN needs increase, so does its need for equipment that's optimized for the VPN. The following are dedicated VPN devices a business can add to its network. You can purchase these devices from companies that produce network equipment:

So far, we've looked at the types of VPNs and the equipment they can use. Next, let's take a closer look at the encryption and protocols that VPN components use.

Sponsored link: Click here to learn more about VPN hardware and installing a VPN on a router.