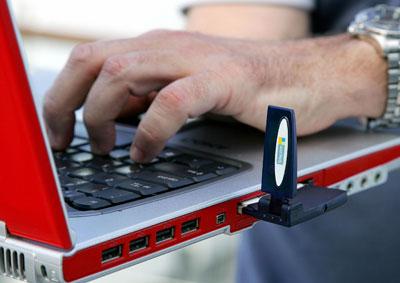 Some wireless Internet cards are installed internally, while others, like this one, protrude from a slot on the computer.
AFP/Getty Images

If you've ever gone into a computer store and looked in the section devoted to adapter cards, you're aware of how many different kinds await you. Cards labeled as PCI refer to the specific language the card uses to communicate with the computer's central processor. PCI stands for Peripheral Component Interconnect, which is an industry standard that refers to the way an attached device talks to the computer through a central pathway called the bus.

PCI network adapters come in many different shapes and sizes called form factors. Two common form factors are the mini PCI, which is a wireless network card that comes embedded inside a laptop computer, and the PCI wireless adapter card for desktops. Since a desktop computer's bus is located inside the computer, wireless Internet cards for desktops have to be installed inside the unit, and most computers come with one preinstalled. If you want an external Internet adapter, you need to look for one that connects through the USB.

Other labels you might see are the PC Card or ExpressCard designations. Whereas PCI wireless network adapters communicate through a computer's bus, PC Card adapters just fit into a slot on the side and are used mainly in laptops because of their thin design. The newer ExpressCard technology has gradually been replacing PC Card adapters.

The PC Card and ExpressCard designations come from PCMCIA, the Personal Computer Memory Card International Association, which is the organization that developed a standard network adapter using the PC form factor. You'll sometimes see these cards labeled as PCMCIA cards. Regardless of the name, they all insert into a slot on the laptop's side, and typically stick out a little bit to better transmit and receive signals with their built-in WiFi antennas.

You also can buy USB keys that plug in to use as wireless adapters. These devices, which resemble the memory sticks or flash drives you stick into an available USB port on the side of your computer, seem to be an increasingly popular choice.

Yet another type of wireless Internet card exists for PDAs. For people who haven't yet jumped on the BlackBerry bandwagon, there is WCF. Wireless CompactFlash cards, like PC Cards, fit into a slot on the side or back of a PDA and enable it to communicate with the Internet.

The variations in wireless Internet cards don't stop there. Learn about some of the other differences next.

Even though wireless connectivity is becoming a lot easier, you're not always going to find yourself in a WiFi hot spot. For these instances, there's WWAN, or a Wireless Wide Area Network. WWAN is another type of wireless connection to the Internet that enables users to connect to the Internet from anywhere that gets cellular service. If WWAN capability isn't already built in to your computer, you'll have to buy a WWAN PC Card or flash drive-type device to use it and purchase a monthly plan. These wireless Internet air cards, available from cell phone service providers such as Verizon, cost about $50 and typically require users to sign a contract. Alternatively, some cell phones can connect to a laptop using a USB cable and act like a modem to get you on the Internet.