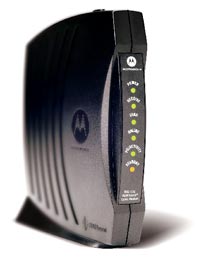 For millions of people, television brings news, entertainment and educational programs into their homes. Many people get their TV signal from cable television (CATV) because cable TV provides a clearer picture and more channels. (See How Cable TV Works for details.)

Many people who have cable TV can now get a high-speed connection to the Internet from their cable provider. Cable modems compete with technologies like asymmetrical digital subscriber lines (ADSL). If you have ever wondered what the differences between DSL and cable modems are, or if you have ever wondered how a computer network can share a cable with dozens of television channels, then read on. In this article, we'll look at how a cable modem works and see how 100 cable television channels and any Web site out there can flow over a single coaxial cable into your home.

You might think that a television channel would take up quite a bit of electrical "space," or bandwidth, on a cable. In reality, each television signal is given a 6-megahertz (MHz, millions of cycles per second) channel on the cable. The coaxial cable used to carry cable television can carry hundreds of megahertz of signals -- all the channels you could want to watch and more. (For more information, see How Television Works.)

In a cable TV system, signals from the various channels are each given a 6-MHz slice of the cable's available bandwidth and then sent down the cable to your house. In some systems, coaxial cable is the only medium used for distributing signals. In other systems, fiber-optic cable goes from the cable company to different neighborhoods or areas. Then the fiber is terminated and the signals move onto coaxial cable for distribution to individual houses.

When a cable company offers Internet access over the cable, Internet information can use the same cables because the cable modem system puts downstream data -- data sent from the Internet to an individual computer -- into a 6-MHz channel. On the cable, the data looks just like a TV channel. So Internet downstream data takes up the same amount of cable space as any single channel of programming. Upstream data -- information sent from an individual back to the Internet -- requires even less of the cable's bandwidth, just 2 MHz, since the assumption is that most people download far more information than they upload.

Putting both upstream and downstream data on the cable television system requires two types of equipment: a cable modem on the customer end and a cable modem termination system (CMTS) at the cable provider's end. Between these two types of equipment, all the computer networking, security and management of Internet access over cable television is put into place.

Inside the Cable Modem

Cable modems can be either internal or external to the computer. In some cases, the cable modem can be part of a set-top cable box, requiring that only a keyboard and mouse be added for Internet access. In fact, if your cable system has upgraded to digital cable, the new set-top box the cable company provides will be capable of connecting to the Internet, whether or not you receive Internet access through your CATV connection. Regardless of their outward appearance, all cable modems contain certain key components:

Inside the Cable Modem: Tuner

The tuner connects to the cable outlet, sometimes with the addition of a splitter that separates the Internet data channel from normal CATV programming. Since the Internet data comes through an otherwise unused cable channel, the tuner simply receives the modulated digital signal and passes it to the demodulator.

In some cases, the tuner will contain a diplexer, which allows the tuner to make use of one set of frequencies (generally between 42 and 850 MHz) for downstream traffic, and another set of frequencies (between 5 and 42 MHz) for the upstream data. Other systems, most often those with more limited capacity for channels, will use the cable modem tuner for downstream data and a dial-up telephone modem for upstream traffic. In either case, after the tuner receives a signal, it is passed to the demodulator.

Inside the Cable Modem: Demodulator

The most common demodulators have four functions. A quadrature amplitude modulation (QAM) demodulator takes a radio-frequency signal that has had information encoded in it by varying both the amplitude and phase of the wave, and turns it into a simple signal that can be processed by the analog-to-digital (A/D) converter. The A/D converter takes the signal, which varies in voltage, and turns it into a series of digital 1s and 0s. An error correction module then checks the received information against a known standard, so that problems in transmission can be found and fixed. In most cases, the network frames, or groups of data, are in MPEG format, so an MPEG synchronizer is used to make sure the data groups stay in line and in order.

Inside the Cable Modem: Modulator

In cable modems that use the cable system for upstream traffic, a modulator is used to convert the digital computer network data into radio-frequency signals for transmission. This component is sometimes called a burst modulator, because of the irregular nature of most traffic between a user and the Internet, and consists of three parts:

Inside the Cable Modem: MAC

The MAC sits between the upstream and downstream portions of the cable modem, and acts as the interface between the hardware and software portions of the various network protocols. All computer network devices have MACs, but in the case of a cable modem the tasks are more complex than those of a normal network interface card. For this reason, in most cases, some of the MAC functions will be assigned to a central processing unit (CPU) -- either the CPU in the cable modem or the CPU of the user's system.

The microprocessor's job depends somewhat on whether the cable modem is designed to be part of a larger computer system or to provide Internet access with no additional computer support. In situations calling for an attached computer, the internal microprocessor still picks up much of the MAC function from the dedicated MAC module. In systems where the cable modem is the sole unit required for Internet access, the microprocessor picks up MAC slack and much more. In either case, Motorola's PowerPC processor is one of the common choices for system designers.

At the cable provider's head-end, the CMTS provides many of the same functions provided by the DSLAM in a DSL system. The CMTS takes the traffic coming in from a group of customers on a single channel and routes it to an Internet service provider (ISP) for connection to the Internet. At the head-end, the cable providers will have, or lease space for a third-party ISP to have, servers for accounting and logging, Dynamic Host Configuration Protocol (DHCP) for assigning and administering the IP addresses of all the cable system's users, and control servers for a protocol called CableLabs Certified Cable Modems -- formerly Data Over Cable Service Interface Specifications (DOCSIS), the major standard used by U.S. cable systems in providing Internet access to users.

The downstream information flows to all connected users, just like in an Ethernet network -- it's up to the individual network connection to decide whether a particular block of data is intended for it or not. On the upstream side, information is sent from the user to the CMTS -- other users don't see that data at all. The narrower upstream bandwidth is divided into slices of time, measured in milliseconds, in which users can transmit one "burst" at a time to the Internet. The division by time works well for the very short commands, queries and addresses that form the bulk of most users' traffic back to the Internet.

A CMTS will enable as many as 1,000 users to connect to the Internet through a single 6-MHz channel. Since a single channel is capable of 30 to 40 megabits per second (Mbps) of total throughput, this means that users may see far better performance than is available with standard dial-up modems. The single channel aspect, though, can also lead to one of the issues some users experience with cable modems.

Pros and Cons to Cable Modems

If you are one of the first users to connect to the Internet through a particular cable channel, then you may have nearly the entire bandwidth of the channel available for your use. As new users, especially heavy-access users, are connected to the channel, you will have to share that bandwidth, and may see your performance degrade as a result. It is possible that, in times of heavy usage with many connected users, performance will be far below the theoretical maximums. The good news is that this particular performance issue can be resolved by the cable company adding a new channel and splitting the base of users.

Another benefit of the cable modem for Internet access is that, unlike ADSL, its performance doesn't depend on distance from the central cable office. A digital CATV system is designed to provide digital signals at a particular quality to customer households. On the upstream side, the burst modulator in cable modems is programmed with the distance from the head-end, and provides the proper signal strength for accurate transmission.

For more information on cable modems and related topics, check out the links on the next page.