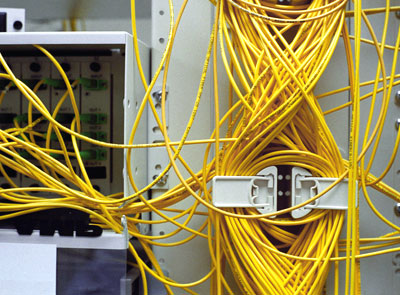 Most of us are familiar with a normal business or residential line from the phone company. A normal phone line like this is delivered on a pair of copper wires that transmit your voice as an analog signal. When you use a normal modem on a line like this, it can transmit data at perhaps 30 kilobits per second (30,000 bits per second).

The phone company moves nearly all voice traffic as digital rather than analog signals. Your analog line gets converted to a digital signal by sampling it 8,000 times per second at 8-bit resolution (64,000 bits per second). Nearly all digital data now flows over fiber optic lines, and the phone company uses different designations to talk about the capacity of a fiber optic line.

If your office has a T1 line, it means that the phone company has brought a fiber optic line into your office (a T1 line might also come in on copper). A T1 line can carry 24 digitized voice channels, or it can carry data at a rate of 1.544 megabits per second. If the T1 line is being used for telephone conversations, it plugs into the office's phone system. If it is carrying data it plugs into the network's router.

­A T1 line can carry about 192,000 bytes per second -- roughly 60 times more data than a normal residential modem. It is also extremely reliable -- much more reliable than an analog modem. Depending on what they are doing, a T1 line can generally handle quite a few people. For general browsing, hundreds of users are easily able to share a T1 line comfortably. If they are all downloading MP3 files or video files simultaneously it would be a problem, but that still isn't extremely common.

A T1 line might cost between $1,000 and $1,500 per month depending on who provides it and where it goes. The other end of the T1 line needs to be connected to a web server, and the total cost is a combination of the fee the phone company charges and the fee the ISP charges.

A large company needs something more than a T1 line. The following list shows some of the common line designations: