Browse the article How the Apple iCloud Works 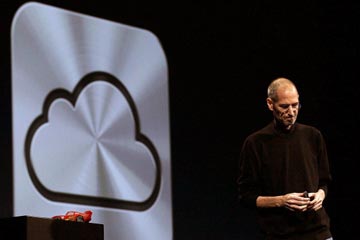 Cloud storage is a growing tech trend. Making use of cloud computing technology, cloud storage services give you password-protected access to online storage space. You can upload files to this storage space as a backup copy of content from your hard drive, as additional space to supplement your hard drive, or just to make those files available online from other computers or mobile devices.

Apple's cloud storage product, iCloud, is designed to work seamlessly with all your Apple devices connected to the Internet. For example, you can upload photos from your iPhone and access them from your MacBook, upload music from your MacBook to listen to from your iPod Touch, or upload an important document from your Mac desktop to access from your iPad when you're on the go.

Apple revamped MobileMe and merged its offerings into the new iCloud service. iCloud not only replaces MobileMe, it also adds features, flexibility and free service for up to 5 GB of storage space. In addition, digital products you purchase through Apple's iTunes Store are available from your iCloud account without counting against that free 5 GB. Later, we'll take a closer look at iCloud's features and pricing and how they compare to other cloud storage products.

Like its MobileMe predecessor, iCloud's biggest advantage is that it's integrated into Apple software. That makes iCloud your most convenient cloud storage option, if all your computers and mobile devices are Apple products. Apps you use in both Mac OS X and Apple iOS can connect to your iCloud space and automatically store your data there, including your contacts list and photo gallery. Also like MobileMe, this can expand to include Apple devices used by other family members, too. With iCloud, you can ensure your data is continuously synchronized among your Apple devices while they're connected to the Internet.

Now that you know what iCloud is, let's take a closer look at its features and costs, and how it keeps your data both safe and readily accessible. 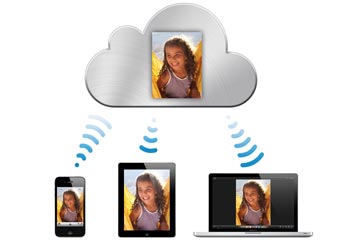 If you upload a photo to your iCloud online storage, you'll be able to access the file from any of your Internet-connected Apple devices.
Image courtesy of Apple, Inc.

iCloud's features give you access to your data, from important contacts to fun photos, anywhere you're connected to the Internet. Here's how you can access iCloud from different types of devices:

You can authorize up to 10 devices to access and use iCloud with your Apple ID. This is a leap beyond the iTunes Store authorization, which is limited to five devices. Plus, iCloud authorization extends beyond iTunes to touch all apps capable of connecting and use iCloud from that device. Developers program each app to connect to and use iCloud content in its own way, so check an app's help pages to find out whether and how it can use iCloud. If you're one of those developers, check out how your app creations can use the iCloud application programming interfaces (APIs) as described at the Apple developer site.

Besides its options for apps to connect to and use the service, iCloud features unlimited free storage for anything you purchase through the iTunes Store. This means that any music, movies, TV shows, books or apps you purchase from iTunes don't count against your free 5 GB of iCloud storage space. In addition, each iTunes purchase is instantly available for download to any of your iCloud-authorized devices, as long as the songs are available from the iTunes store. In short, buy it once, access it everywhere. This even applies to purchases you made under the same Apple ID long before iCloud existed, provided they're still available in the iTunes Store.

It's possible that 5 GB is plenty for your storing your non-iTunes files in iCloud, such as documents and photos. However, Apple also realizes that you might want more space, and you can purchase subscription-based upgrades to fill that need. As of this writing, Apple is offering the following subscription options for increasing your iCloud storage space:

Let's continue exploring iCloud's features on the next page with a look at your streaming media and device backup options.

So far, we've concentrated on iCloud's storage features. Another important feature, though, is the option to stream music and videos from the cloud. As of this writing, streaming is not a part of iCloud's basic services. If it were, you could play media content directly from iCloud rather than having to download it first. This could be particularly useful if you have a large music or video collection and don't want to use up all the available space on your iPhone, iPad or iPod Touch. Apple piqued the curiosity of those anticipating a streaming option, though, when it offered free streaming of a new Red Hot Chili Peppers album for iTunes desktop users in late August 2011 [source: Dockrill].

Perhaps the biggest advantage of the iCloud service is how you can use it to back up and restore data on your Apple iOS devices. iCloud is capable of taking daily backups of your iPhone, iPad or iPod Touch when it's connected to the Internet using WiFi. These aren't full backups, which would include all the data stored on each device. Instead, these are partial backups that store only the data you've changed on the device. The following are the types of data that iCloud can back up from your iOS device:

In addition to simplifying the backup process, the iCloud service makes quick work out of restoring an Apple iOS device from backup. You'll probably want to restore your device any time you lose important data, reset or replace the device, or upgrade to new hardware. Apple iOS 5 will automatically restore from your iCloud backups as soon as you sign in with your Apple ID over a WiFi connection.

We've looked at the features Apple iCloud has to offer. Next, let's see what challenges iCloud faces and how it stacks up to its competition in the cloud storage market.

Though not a component of iCloud, another technology you can use to improve your iCloud experience is Apple's iTunes Match. This applies to music content that you've purchased from another source and added to your iTunes library. This includes, for example, music you've imported from CDs. What iTunes Match will do is identify whether that music is also available in the iTunes Store and then add that music to your iCloud library. What iTunes can't match, you can upload to iCloud. This means you'll have the same convenient access to those tracks as you have to your iTunes purchases. In addition, the music iTunes matches plays back at 256 Kbps iTunes Plus quality, regardless of the quality of your original copy. iTunes Match service requires a subscription of $24.99 per year.

Many of iCloud's challenges are the same as those faced by other cloud service providers. Users are limited to using software specially designed to access that particular cloud. Though iCloud is available anywhere you can access the Internet, it still requires some sort of front end application to manage the connection between you and your data. This is either built into the app you're using, or is available by browsing to icloud.com.

iCloud also faces the same Internet access challenges as other cloud player products. One way Apple has addressed this is by limiting the iCloud software so that certain interactions can only occur when using a WiFi Internet connection. This means your device won't eat up a limited 3G wireless data plan just for regularly scheduled synchronization tasks.

One unique challenge for iCloud started in a courtroom rather than a computer. Within days of Apple's June 2011 announcement naming the iCloud product, an Arizona voice-over-IP (VoIP) provider filed a lawsuit. The firm, iCloud Communications, had owned the right to its company name since 2005. Apple had filed eleven trademark applications for the iCloud name and brand and purchased the icloud.com domain from Swedish company Xcerion. According to the U.S. Patent and Trademark Office, iCloud Communications didn't register the iCloud brand itself, leaving it up for grabs. One legal expert predicted that Apple would settle the lawsuit out of court, but the case was not yet resolved as of this writing [sources: Hollister, Keizer].

Since iCloud isn't the only cloud storage service out there, how does it stack up to its competition? In terms of legally providing music with cloud service, a court ruling in August 2011seems to have cleared the air for these new type of music services by ruling that they could offer scan-and-match services without the consent of record labels [source: Milian]. With that issue out of the way, it's all down to which service provides the features and quality you want at the right price.

Here's a quick look at some other cloud storage services and how they compare to iCloud:

Now you know some basics about how iCloud works and the features that make it a true competitor among end-user cloud storage services. If your head's already in the iCloud and eager for more, check out additional information on the next page.

As of this writing, Apple is in transition between its MobileMe and iCloud services. Apple announced that it was ending its MobileMe service effective June 30, 2012. As of June 6, 2011, Apple stopped accepting new MobileMe subscriptions, and existing subscribers had their service extended through the remainder of MobileMe's existence at no additional cost. This gave MobileMe customers over a year's notice to transition to iCloud, though iCloud itself is not scheduled to be fully available until later in the fall. Apple posted details here to help its customers through the MobileMe transition.