Browse the article How will computers evolve over the next 100 years? 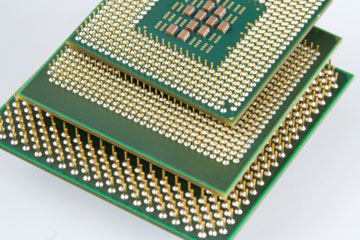 To call the evolution of the computer meteoric seems like an understatement. Consider Moore's Law, an observation that Gordon Moore made back in 1965. He noticed that the number of transistors engineers could cram onto a silicon chip doubled every year or so. That manic pace slowed over the years to a slightly more modest 24-month cycle.

Awareness of the breakneck speed at which computer technology develops has seeped into the public consciousness. We've all heard the joke about buying a computer at the store only to find out it's obsolete by the time you get home. What will the future hold for computers?

Assuming microprocessor manufacturers can continue to live up to Moore's Law, the processing power of our computers should double every two years. That would mean computers 100 years from now would be 1,125,899,906,842,624 times more powerful than the current models. That's hard to imagine.

But even Gordon Moore would caution against assuming Moore's Law will hold out that long. In 2005, Moore said that as transistors reach the atomic scale we may encounter fundamental barriers we can't cross [source: Dubash]. At that point, we won't be able to cram more transistors in the same amount of space.

We may get around that barrier by building larger processor chips with more transistors. But transistors generate heat, and a hot processor can cause a computer to shut down. Computers with fast processors need efficient cooling systems to avoid overheating. The larger the processor chip, the more heat the computer will generate when working at full speed.

Future computers may rely on a completely different model than traditional machines. What if we abandon the old transistor-based processor?

Fiber-optic technology has already begun to revolutionize computers. Fiber-optic data lines carry information at incredible speeds and aren't vulnerable to electromagnetic interference like classic cables. What if we were to build a computer that uses light to transmit information instead of electricity?

One benefit is that an optical or photonic system would generate less heat than the traditional electronic transistor processor. The data would transmit at a faster rate as well. But engineers have yet to develop a compact optical transistor that can be mass produced. Scientists at ETH Zurich were able to build an optical transistor just one molecule in size. But to make the system effective, the scientists had to cool the molecule to minus 272 degrees Celsius, or 1 degree Kelvin. That's just a little warmer than deep space [source: Science Daily]. That's not really practical for the average computer user.

Photonic transistors could become part of a quantum computer. Unlike traditional computers, which use binary digits or bits to perform operations, quantum computers use quantum bits or qubits. A bit is either a 0 or a 1. Think of it like a switch that is either off or on. But a qubit can be both a 0 and a 1 (or anything in between) at the same time. The switch is both off and on and everything in between.

A working quantum computer should be able to solve big problems that can be split into smaller ones much faster than a traditional computer. We call these problems embarrassingly parallel problems. But quantum computers are, by their very nature, unstable. If the quantum state of the computer is upset, the machine could revert to the computing power of a traditional computer. Like the optical transmitter created at ETH Zurich, quantum computers are kept at just a few degrees above absolute zero to preserve their quantum states.

Perhaps the future of computers lies inside of us. Teams of computer scientists are working to develop computers that use DNA to process information. This combination of computer science and biology could lead the way to the next generation of computers. A DNA computer might have several advantages over traditional machines. For example, DNA is a plentiful and cheap resource. If we discover a way to harness DNA as a data processing tool, it could revolutionize the computer field.

Through The Rabbit Hole

The world of quantum physics is a strange one, particularly if you're only familiar with classical physics. At the quantum level -- which includes the world of atomic particles up to molecular structures -- the normal rules don't apply. For example, we know that by observing a quantum event we change that event's outcome -- so it's impossible to measure anything on the quantum scale without altering it in some way. 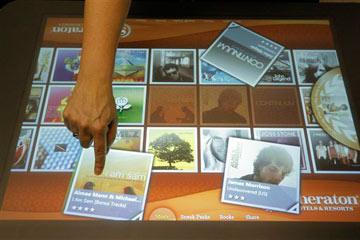 A popular theme in science fiction stories set in the future is ubiquitous computing. In this future, computers have become so small and pervasive that they are in practically everything. You might have computer sensors in your floor that can monitor your physical health. Computers in your car that can assist you when you drive to work. And computers practically everywhere track your every move.

It's a vision of the future that is both exhilarating and frightening. On the one hand, computer networks would become so robust that we'd always have a fast, reliable connection to the Internet. You could communicate with anyone you choose no matter where you were with no worries about interruption in service. But on the other hand, it would also become possible for corporations, governments or other organizations to gather information about you and keep tabs on you wherever you go.

We've seen steps toward ubiquitous computing over the last decade. Municipal Wi-Fi projects and 4G technologies like LTE and WiMAX have extended network computing far beyond the world of wired machines. You can purchase a smartphone and access petabytes of information on the World Wide Web in a matter of seconds. Sensors in traffic stoplights and biometric devices can detect our presence. It may not be long before nearly everything we come into contact with has a computer or sensor inside it.

We may also see massive transformations in user interface technology. Currently, most computers rely on physical input interfaces like a computer mouse, keyboard, tracking pad or other surface upon which we input commands. There are also computer programs that can recognize your voice or track your eye movements to execute commands. Computer scientists and neurologists are working on various brain-computer interfaces that will allow people to manipulate computers using only their thoughts. Who knows? The computers of the future may react seamlessly with our desires.

To extrapolate out to 100 years is difficult. Technological progress isn't necessarily linear or logarithmic. We may experience decades of progress followed by a period in which we make very little headway as we bump up against unforeseen barriers. On the other hand, according to some futurists, there may be no meaningful difference between computers and humans within 100 years. In that world, we'll be transformed into a new species that can improve upon itself at a pace unimaginable to us in our current forms. Whatever the future may hold, it's a safe bet to assume the machines we rely upon will be very different from today's computers.

Learn more about computer technology by following the links on the next page.