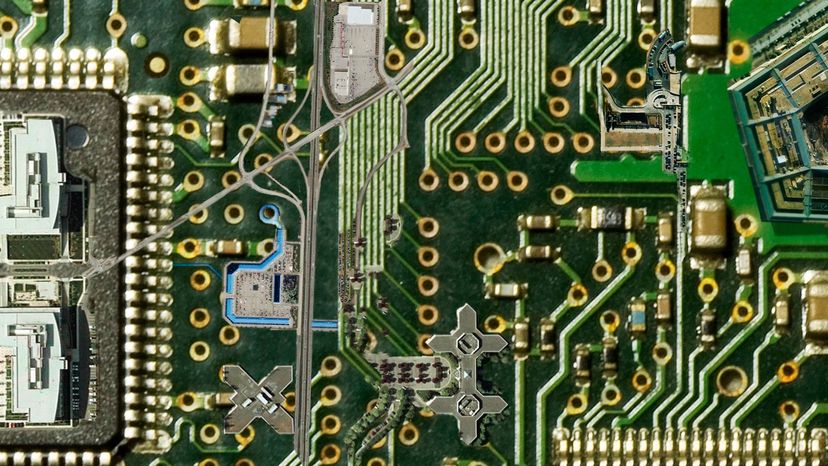 When you think about it, it's amazing how many different types of electronic memory you encounter in daily life. Many of them have become an integral part of our vocabulary:

You already know that the computer in front of you has memory. What you may not know is that most of the electronic items you use every day have some form of memory also. Here are just a few examples of the many items that use memory:

In this article, you'll learn why there are so many different types of memory and what all of the terms mean. On the next page, let's start with the basics: What exactly does computer memory do? 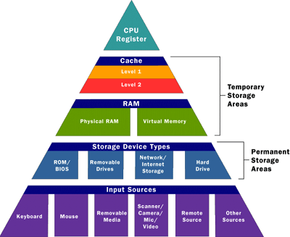 Although memory is technically any form of electronic storage, it is used most often to identify fast, temporary forms of storage. If your computer's CPU had to constantly access the hard drive to retrieve every piece of data it needs, it would operate very slowly. When the information is kept in memory, the CPU can access it much more quickly. Most forms of memory are intended to store data temporarily.

The CPU accesses memory according to a distinct hierarchy. Whether it comes from permanent storage (the hard drive) or input (the keyboard), most data goes in random access memory (RAM) first. The CPU then stores pieces of data it will need to access, often in a cache, and maintains certain special instructions in the register. We'll talk about cache and registers later.

All of the components in your computer, such as the CPU, the hard drive and the operating system, work together as a team, and memory is one of the most essential parts of this team. From the moment you turn your computer on until the time you shut it down, your CPU is constantly using memory. Let's take a look at a typical scenario:

­In the list above, every time something is loaded or opened, it is placed into RAM. This simply means that it has been put in the computer's temporary storage area so that the CPU can access that information more easily. The CPU requests the data it needs from RAM, processes it and writes new data back to RAM in a continuous cycle. In most computers, this shuffling of data between the CPU and RAM happens millions of times every second. When an application is closed, it and any accompanying files are usually purged (deleted) from RAM to make room for new data. If the changed files are not saved to a permanent storage device before being purged, they are lost.

One common question about desktop computers that comes up all the time is, "Why does a computer need so many memory systems?"

A typical computer has:

Why so many? The answer to this question can teach you a lot about memory!

Fast, powerful CPUs need quick and easy access to large amounts of data in order to maximize their performance. If the CPU cannot get to the data it needs, it literally stops and waits for it. Modern CPUs running at speeds of about 1 gigahertz can consume massive amounts of data -- potentially billions of bytes per second. The problem that computer designers face is that memory that can keep up with a 1-gigahertz CPU is extremely expensive -- much more expensive than anyone can afford in large quantities.

The cheapest form of read/write memory in wide use today is the hard disk. Hard disks provide large quantities of inexpensive, permanent storage. You can buy hard disk space for pennies per megabyte, but it can take a good bit of time (approaching a second) to read a megabyte off a hard disk. Because storage space on a hard disk is so cheap and plentiful, it forms the final stage of a CPUs memory hierarchy, called virtual memory.

The next level of the hierarchy is RAM. We discuss RAM in detail in How RAM Works, but several points about RAM are important here.

Megahertz (MHz) is a measure of a CPU's processing speed, or clock cycle, in millions per second. So, a 32-bit 800-MHz Pentium III can potentially process 4 bytes simultaneously, 800 million times per second (possibly more based on pipelining)! The goal of the memory system is to meet those requirements.

A computer's system RAM alone is not fast enough to match the speed of the CPU. That is why you need a cache (discussed later). However, the faster RAM is, the better. Most chips today operate with a cycle rate of 50 to 70 nanoseconds. The read/write speed is typically a function of the type of RAM used, such as DRAM, SDRAM, RAMBUS. We will talk about these various types of memory later.

System RAM speed is controlled by bus width and bus speed. Bus width refers to the number of bits that can be sent to the CPU simultaneously, and bus speed refers to the number of times a group of bits can be sent each second. A bus cycle occurs every time data travels from memory to the CPU. For example, a 100-MHz 32-bit bus is theoretically capable of sending 4 bytes (32 bits divided by 8 = 4 bytes) of data to the CPU 100 million times per second, while a 66-MHz 16-bit bus can send 2 bytes of data 66 million times per second. If you do the math, you'll find that simply changing the bus width from 16 bits to 32 bits and the speed from 66 MHz to 100 MHz in our example allows for three times as much data (400 million bytes versus 132 million bytes) to pass through to the CPU every second.

In reality, RAM doesn't usually operate at optimum speed. Latency changes the equation radically. Latency refers to the number of clock cycles needed to read a bit of information. For example, RAM rated at 100 MHz is capable of sending a bit in 0.00000001 seconds, but may take 0.00000005 seconds to start the read process for the first bit. To compensate for latency, CPUs uses a special technique called burst mode.

Burst mode depends on the expectation that data requested by the CPU will be stored in sequential memory cells. The memory controller anticipates that whatever the CPU is working on will continue to come from this same series of memory addresses, so it reads several consecutive bits of data together. This means that only the first bit is subject to the full effect of latency; reading successive bits takes significantly less time. The rated burst mode of memory is normally expressed as four numbers separated by dashes. The first number tells you the number of clock cycles needed to begin a read operation; the second, third and fourth numbers tell you how many cycles are needed to read each consecutive bit in the row, also known as the wordline. For example: 5-1-1-1 tells you that it takes five cycles to read the first bit and one cycle for each bit after that. Obviously, the lower these numbers are, the better the performance of the memory.

Burst mode is often used in conjunction with pipelining, another means of minimizing the effects of latency. Pipelining organizes data retrieval into a sort of assembly-line process. The memory controller simultaneously reads one or more words from memory, sends the current word or words to the CPU and writes one or more words to memory cells. Used together, burst mode and pipelining can dramatically reduce the lag caused by latency.

So why wouldn't you buy the fastest, widest memory you can get? The speed and width of the memory's bus should match the system's bus. You can use memory designed to work at 100 MHz in a 66-MHz system, but it will run at the 66-MHz speed of the bus so there is no advantage, and 32-bit memory won't fit on a 16-bit bus.

Even with a wide and fast bus, it still takes longer for data to get from the memory card to the CPU than it takes for the CPU to actually process the data. That's where caches come in.

Caches are designed to alleviate this bottleneck by making the data used most often by the CPU instantly available. This is accomplished by building a small amount of memory, known as primary or level 1 cache, right into the CPU. Level 1 cache is very small, normally ranging between 2 kilobytes (KB) and 64 KB.

The secondary or level 2 cache typically resides on a memory card located near the CPU. The level 2 cache has a direct connection to the CPU. A dedicated integrated circuit on the motherboard, the L2 controller, regulates the use of the level 2 cache by the CPU. Depending on the CPU, the size of the level 2 cache ranges from 256 KB to 2 megabytes (MB). In most systems, data needed by the CPU is accessed from the cache approximately 95 percent of the time, greatly reducing the overhead needed when the CPU has to wait for data from the main memory.

A particular type of RAM, static random access memory (SRAM), is used primarily for cache. SRAM uses multiple transistors, typically four to six, for each memory cell. It has an external gate array known as a bistable multivibrator that switches, or flip-flops, between two states. This means that it does not have to be continually refreshed like DRAM. Each cell will maintain its data as long as it has power. Without the need for constant refreshing, SRAM can operate extremely quickly. But the complexity of each cell make it prohibitively expensive for use as standard RAM.

The SRAM in the cache can be asynchronous or synchronous. Synchronous SRAM is designed to exactly match the speed of the CPU, while asynchronous is not. That little bit of timing makes a difference in performance. Matching the CPU's clock speed is a good thing, so always look for synchronized SRAM. (For more information on the various types of RAM, see How RAM Works.)

The final step in memory is the registers. These are memory cells built right into the CPU that contain specific data needed by the CPU, particularly the arithmetic and logic unit (ALU). An integral part of the CPU itself, they are controlled directly by the compiler that sends information for the CPU to process. See How Microprocessors Work for details on registers.

For a handy printable guide to computer memory, you can print the HowStuffWorks Big List of Computer Memory Terms.

For more information on computer memory and related topics, check out the links on the next page.

Memory can be split into two main categories: volatile and nonvolatile. Volatile memory loses any data as soon as the system is turned off; it requires constant power to remain viable. Most types of RAM fall into this category.

Nonvolatile memory does not lose its data when the system or device is turned off. A number of types of memory fall into this category. The most familiar is ROM, but Flash memory storage devices such as CompactFlash or SmartMedia cards are also forms of nonvolatile memory. 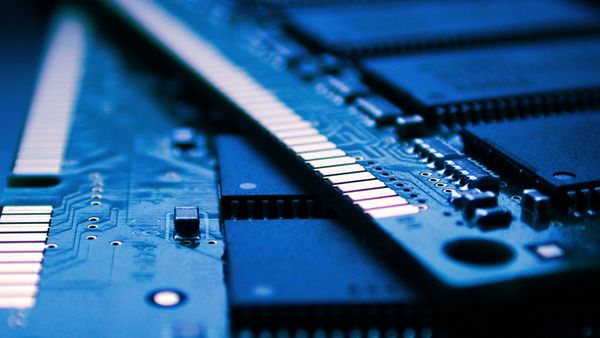 Up Next
How RAM Works
Explore More 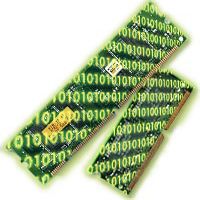 You May Like
How Virtual Memory Works
Explore More