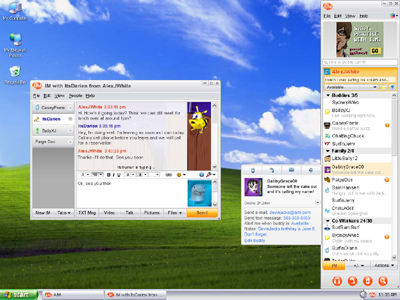 AOL Instant Messenger is one of the oldest IM programs.
Image courtesy of AOL

Instant messaging (IM) epitomizes communication in the Internet age. It's fast, informal and free. According to 2006 statistics, nearly 70 million North Americans, or 37 percent of the total online population, use IM on a regular basis. In the rest of the world, IM usage is even higher, with 49 percent of online Europeans and 64 percent of online Latin Americans using IM regularly [source: ComSCORE].

What's IM exactly? By downloading a small program on their computer, IM users can send and receive short text messages over the Internet. IMs are different than e-mails, because they enable a real-time conversation between two or more people. When I type an IM and press send, the other people in the conversation see that message immediately and can reply within seconds.

AOL Instant Messenger (AIM) is one of the most popular IM programs. It's also one of the oldest. The first version of AIM was released in 1997, one year after the release of ICQ, the very first publicly available IM client. Now AIM boasts 33 million unique users every month. During peak hours, over 6 million people are logged on to AIM at the same time [source: AOL].

AIM has evolved over the years to offer an expanding list of services. Besides sending simple text messages, users can now share photos, videos, music and other files. They can even use the AIM software to make free Internet phone and video calls.

In this HowStuffWorks article, we're going to explain how AIM works including how to set up an account and how to use the software's basic and advanced features. Let's start with the basics.