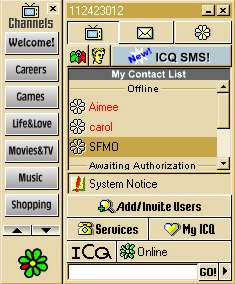 ICQ was one of the first IM applications.

Before the Internet became popular, a lot of people were already online. The major online services, such as America Online (AOL), Prodigy and CompuServe, were the main way that ordinary people could connect and communicate with each other online. Online services provide the actual interface that you use when you're connected to the service, which creates a targeted experience for users.

­In the early 1990s, people began to spend more and more time on the Internet. Creative software developers designed chat-room software and set up chat rooms on Web servers. In a chat room, a group of people can type in messages that are seen by everyone in the "room." Instant messages are basically a chat room for just two people.­

Instant messaging really exploded on the Internet scene in November 1996. That's when Mirabilis introduced ICQ, a free instant-messaging utility that anyone could use. ICQ, shorthand for "I seek you," uses a software application, called a client, that resides on your computer. The client communicates with an ICQ server whenever you are online and the client is running.

In 1997, AOL, considered the pioneer of the online community, gave its users the ability to talk in real time with each other through chat rooms and instant messages. In June 1998, AOL acquired Mirabilis and ICQ.

The ICQ model is the basis for most instant-messaging utilities on the market today. In the next section we'll examine how these services work.