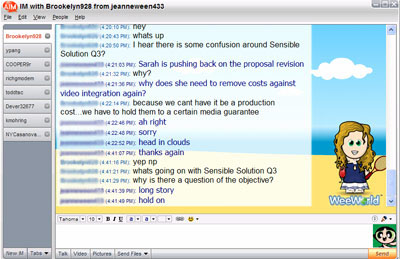 Users of AIM can personalize their own "WeeMee" buddy icons.

Not long after AOL bought ICQ, AOL Instant Messenger (AIM) became the IM leader. In the past few years, though, a number of services have cut into AIM's audience. Windows Live Messenger (formerly MSN Messenger) and Yahoo! Messenger, in particular, have become widely used around the globe. Google recently introduced its IM system, Google Talk. Proprietary multiprotocol applications like Trillian and Pidgin, which allow users to IM on several services at once, are also rapidly gaining in popularity. According to a 2006 study by comScore, which measures Internet usage, about half of the online population uses IM.

The major IM utilities use a proprietary protocol that is not understood by other instant-messaging services, so users of one service are usually blocked from contacting members of another. A key reason for AIM's initial popularity is that it allowed AOL subscribers to communicate with nonmembers. One of the provisions of the AOL-Time Warner merger in 2001 was that AOL would allow access to the AOL community and AIM protocol, but since then other instant-messaging utilities have provided more accessibility. Microsoft and Yahoo! joined forces in 2006 to allow their users to communicate with each other on one service.

Windows Live Messenger and Yahoo! Messenger subscribers can communicate with each other on one service.

It is important to note that instant messaging is not considered a secure way to communicate. Messages and connection information are maintained on servers controlled by the provider of your IM utility. Most utilities do provide a certain level of encryption, but they are not so secure that you should send any confidential information through the system. There have been reported cases of IM user logs being captured and used by nefarious sorts, and hackers have been known to instant-message virus-infected files. Voice Over Internet Protocol­ is thought to be more vulnerable to infiltration than text-based instant-messaging.