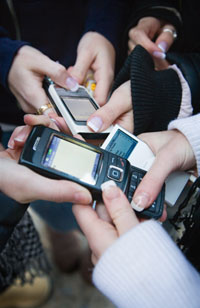 While the National Weather Service's radio network is a great way to get bad weather alerts straight from the source, you're not always near one of the radio receivers that can pick up the emergency weather alert. And while you can subscribe to a cell phone service for emergency alerts, often the company is simply transmitting information from the EAS. If weather warnings came directly to you as text message alerts, you could receive them right away wherever you were.

The FCC and FEMA are working to make the emergency alerts that come through EAS available in that way and more. While information sent through EAS is currently only available on radios and televisions, the plan is to create a system that can send audio, video and text messages to landline phones, Web sites, e-mail accounts and cell phones [sources: NOAA and RCR Wireless News].

The FCC approved a plan in April 2008 to send emergency alerts to cell phone users. Here's how it would work. A federal agency would be appointed to create the messages and send them to participating mobile providers. (While these providers are not required to participate, T-Mobile, Verizon, Sprint, Nextel and AT&T have said they would participate.) The mobile providers would then send the messages to their subscribers. Similar to the companies themselves, cell-phone users could say they did not want to receive the messages.

The alerts could be triggered by any of these events:

Once the message-sending federal agency is appointed, the participating mobile providers would have 10 months to meet the requirements of the new system. They would, for example, be required to make the alerts accessible to people with disabilities by providing a distinct vibration cadence or sound cue to signal emergency text messages.

The so-called commercial mobile alert system (CMAS) for all Americans is required by the Warning, Alert and Response Network Act, which Congress approved in October 2006. However, a nationwide mobile alert system is not expected to be in place until sometime in 2010 [source: FCC Commercial Mobile Service Alert Committee].

For lots more information about weather alerts and related topics, check out the links below.