Some people love to take things apart to see how they work. But just because you can take a gadget apart doesn't mean you can put it back together again. Even a successful rebuild doesn't guarantee the device will still work. It's best to leave some deconstruction projects to the professionals. When the device in question is a computer, this warning is particularly important.

Computers can be complicated, delicate and even dangerous. But that doesn't stop us from wanting to know what's actually inside one. That's why we here at HowStuffWorks have taken it upon ourselves to dismantle a perfectly innocent computer in the name of science. We chose an IBM ­laptop computer, which not only has all the standard components you'd find in most computers, but also arranges them together into a very compact configuration.

We'll begin with a little laptop neurosurgery. Join us in the next section as we take a closer look at the brains of a computer.

The base of operations for the brains of a computer is the motherboard. The motherboard serves as a literal foundation for many of the other elements inside your computer. It's a large printed circuit board. The motherboard provides the connections and sockets that let other components communicate with each other. Motherboards come in different shapes and sizes -- a motherboard in a laptop computer might not look like one from a desktop PC.

The computer brain is a microprocessor called the central processing unit (CPU). The CPU is a chip containing millions of tiny transistors. It's the CPU's job to perform the calculations necessary to make the computer work -- the transistors in the CPU manipulate the data. You can think of a CPU as the decision maker.

­Another critical component in computers is memory. The two most important kinds of memory are read-only memory (ROM) and random access memory (RAM). Computers can read data stored in ROM, but can't write new data to it. With RAM, computers can read from and write to that memory. Without computer memory, every calculation on a computer would be stateless. That means there'd be no way to preserve information from one moment to the next and every process would start on a clean slate. That's not useful if you want to create complex programs.

Many desktop PCs have the capacity for additional RAM. The user simply has to open the computer and plug RAM chips into the appropriate sockets on the motherboard. But other computers are sealed systems -- you aren't meant to open them and make changes so you're pretty much stuck with what you've got.

A chip called the Basic Input/Output System (BIOS) works closely with the CPU. BIOS is a specific kind of ROM. If you think of the CPU as the brain of the computer, then you might consider BIOS to be the spine. It's the job of BIOS to handle interactions between the software running on a computer and the machine's hardware components.

The motherboard, CPU, ROM, RAM and BIOS handle most of the heavy lifting for computer processes. They're in charge of allocating resources to applications so that they run smoothly. They also accept input from devices like keyboards, mice and other computer accessories.

There are plenty of other components inside your computer. Let's get into the guts of a computer in the next section.

While we group graphics cards with the "guts" of a computer, some have their own microprocessors called a graphics processing unit (GPU). The GPU can handle some of the processing power required to generate rich graphics, which takes some of the load off the CPU.

So what else is inside your computer? We can divide up the guts of a computer into five categories:

The power supply component provides a supply of electricity throughout the rest of the computer. When you plug your computer into a power socket, electricity flows from the cord into a shielded box containing a transformer. The transformer's job is to convert the incoming electricity into the proper voltage for each part of the machine that needs electricity. If you're using a laptop, some of that power goes to the laptop's battery to charge it. When unplugged, a laptop has to rely on the charge inside the battery for its power needs.

Computers have a small battery inside them that's always on, even when you power down the rest of the computer. This battery helps preserve data stored in a special chip in charge of maintaining information about your computer's hardware. It also powers a clock, which is why your computer should keep time accurately even if you turn it off or unplug it.

­ Older computers used floppy disk drives. Newer computers have optical storage drives like CD-ROM or DVD-ROM drives. These drives allow you to use media storage devices like compact discs or DVDs with your computer.

Modems are machines that let computers communicate with other computing systems. Modems are closely related to wireless cards, which are radio transceivers that can send and receive data through a specific frequency of radio waves.

Sound and graphics cards are pretty self-explanatory. They give your computer the ability to display graphics or play sounds and music. Not all cards are the same -- some support more software formats than others. Graphics cards in particular come in a wide variety of specs.

There you have it. That covers the major elements that are inside a typical computer. Now you don't have to take one apart and look at it yourself. And we get to find out if this computer will still work once we put it back together.

To learn more about computers and other related topics, take a look at the links on the next page. 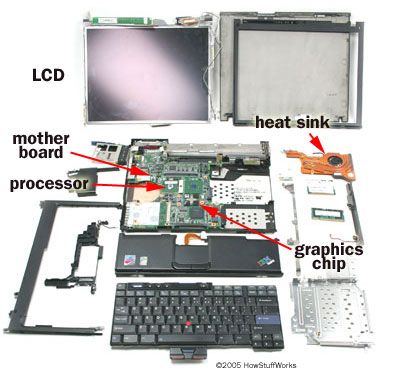 Up Next
How Laptops Work­
Explore More 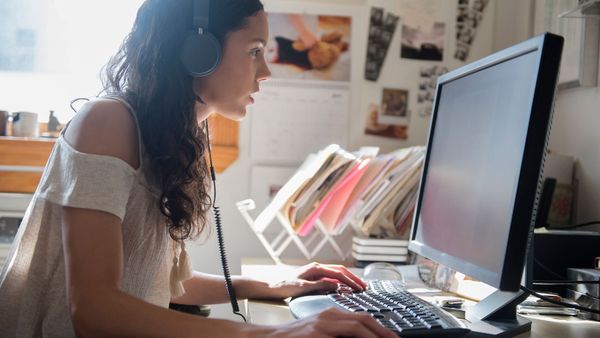