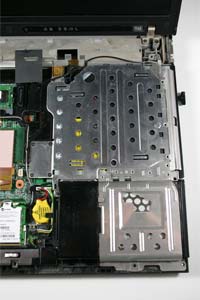 So what else is inside your computer? We can divide up the guts of a computer into five categories:

The power supply component provides a supply of electricity throughout the rest of the computer. When you plug your computer into a power socket, electricity flows from the cord into a shielded box containing a transformer. The transformer's job is to convert the incoming electricity into the proper voltage for each part of the machine that needs electricity. If you're using a laptop, some of that power goes to the laptop's battery to charge it. When unplugged, a laptop has to rely on the charge inside the battery for its power needs.

Computers have a small battery inside them that's always on, even when you power down the rest of the computer. This battery helps preserve data stored in a special chip in charge of maintaining information about your computer's hardware. It also powers a clock, which is why your computer should keep time accurately even if you turn it off or unplug it.

­ Older computers used floppy disk drives. Newer computers have optical storage drives like CD-ROM or DVD-ROM drives. These drives allow you to use media storage devices like compact discs or DVDs with your computer.

Modems are machines that let computers communicate with other computing systems. Modems are closely related to wireless cards, which are radio transceivers that can send and receive data through a specific frequency of radio waves.

Sound and graphics cards are pretty self-explanatory. They give your computer the ability to display graphics or play sounds and music. Not all cards are the same -- some support more software formats than others. Graphics cards in particular come in a wide variety of specs.

There you have it. That covers the major elements that are inside a typical computer. Now you don't have to take one apart and look at it yourself. And we get to find out if this computer will still work once we put it back together.

To learn more about computers and other related topics, take a look at the links below.