What can Google Docs do? 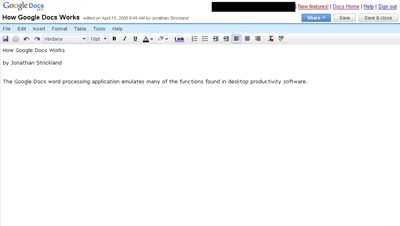 At its heart, Google Docs is a suite of online productivity software. That means it's a collection of applications that make it easier to produce the kinds of files commonly used in corporate environments: documents, spreadsheets and presentations.

The Google word processing program started out as a product named Writely created by a company called Upstartle. Google acquired Upstartle in 2006 and began the process of converting Writely into a Google-branded product [source: InformationWeek]. The program allows users to create and edit documents online. Multiple users can access the document at the same time, making it easier for teams to collaborate on projects.

The story is much the same for the presentation application in Google Docs. Google acquired Tonic Systems, a company that developed a suite of Java-based presentation software. Tonic's development team transitioned to Google and modified the software to integrate with the rest of Google's products [source: The Official Google Blog].

None of the applications within the Google Docs suite are as robust or versatile as the leading desktop productivity software packages. But Google updates the suite often, adding new features and capabilities. While the applications don't have all the bells and whistles of other software packages, they do meet basic user needs. And while Google Docs might not do everything other products can do, it does have several features that set it apart from the rest of the pack.

What are those features? And what sort of limitations do users have with Google Docs? Find out in the next section.

When Google first introduced its productivity software to the market, the company called the suite Google Docs and Spreadsheets. In its original format, the suite allowed users to only create and edit document or spreadsheet files. Once Google added the presentations function, it shortened the suite's name to Google Docs. This disappointed some people, as they had begun to call the software by the nickname "Google Dachshund Spreadsheets."