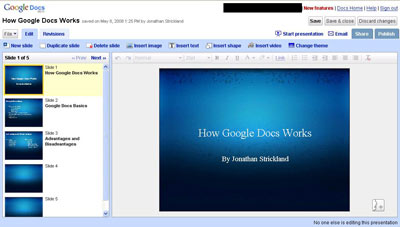 Whenever there's a discussion about storing data on a third party's database system, questions about security follow. It's easy to understand. Entrusting another company to keep your valuable information safe is a big step. When that information is in your control, you're aware of the security measures in place to keep it safe.

Google assures users that it keeps all data safe and private unless the user chooses to share files with others. As part of its security measures, Google doesn't discuss its approach to security in detail. Since users must have a Google account to access Google Docs, and since all accounts require passwords, we know that at least one stage in Google's security plan relies on password protection.

Google also assures users that unless they publish a file, search engines won't be able to find the information contained within those files. Google doesn't allow search engine spiders -- the applications that crawl through the Internet looking for keywords as a way of building search results -- to access the data within Google Docs.

Because Google Docs allows multiple editors to work from the same master document, there are special synchronization issues Google must deal with. Google Docs handles online edits in real time, and editors can see changes as other collaborators make them. But with offline editing capabilities, this gets a little trickier.

Imagine that you're working on a newsletter with another writer. The two of you are traveling by plane for several hours, and you both would like to work on the newsletter during the flight. Since you can't access the Internet in mid-flight -- at least, not yet -- you'll have to work offline. Each of you choose the offline feature in Google Docs and work on the document. Upon landing, you both sync up to the Google Docs system, but you've both made changes to the same section in the newsletter. What happens then?

Well, whomever logged in first (let's say it was the other writer) will sync up with the master document without any problems. But you will get a message from Google explaining that your changes conflict with another user's edits. Google gives you the option to compare the two sets of changes. At that point, you can either grudgingly accept your fellow writer's changes, or you can bravely replace his or her text with your own.

Another concern some users have is a question of ownership. Section 11.1 of Google's terms of service says that "you give Google a worldwide, royalty-free, and non-exclusive license to reproduce, adapt, modify, translate, publish, publicly perform, publicly display and distribute any Content which you submit, post or display on or through the Service for the sole purpose of enabling Google to provide you with the Service in accordance with its Privacy Policy [source: Google]." Upon first glance, this raises some pretty strong warning bells for some users. It sounds like Google says that it can do anything with the content you create and store on Google Docs.

Google claims that the company has no intention of exploiting user-generated content. The Google Docs FAQ states that users retain all ownership rights to their own materials. Google says it included the section as a way to ensure Google Docs can do what it's designed to do. In order to display user's files the way the user wishes, Google must secure an agreement between the company and the user. That way, if the user chooses to publish a file through Google, the company has the required permission to distribute that file on the Web.

What exactly keeps this complex system running? Keep reading to find out.